60s and 70s Rock Nightclub History Navigation and Tracker
Over the years, I have done detailed research into the performance histories of various rock music nightclubs in the 1960s and 70s. The goal has always been to identify an exact record of every musical performer at a club over a given period. Due to the paucity of sources, sometimes the chronicle may be incomplete, but not for lack of effort. In some cases, for less well-documented clubs, the goal is to identify every performer, even if the exact nights of their performances can't be nailed down.

60s rock found its footing in psychedelic ballrooms, and moved on up to civic auditoriums and basketball arenas. By the 1970s, the big business of rock touring took away many of the regional differences. If you saw the Grateful Dead, or Mott The Hoople or the Doobie Brothers in San Francisco, Des Moines or Boston, it was probably pretty much the same in each city. As the biggest bands moved up to the auditoriums, however, the rock audience got older and found that they liked a drink while watching music.

Rock nightclubs, rare in the 60s, were common in the 1970s. Unlike the big arenas, there were distinct differences between regions. There were even differences between parts of the Bay Area. The demographics of parking, FM radio and economies made each club distinct from its competitors, at least for a while. I have not used a precise definition of what makes a "rock nightclub," but the general criteria are:

This excludes rock venues with a bar in the back, or coffee shops. There isn't a size limit to my analysis, but my goal is to look at the middle tier of 60s and 70s rock.

By identifying a complete list, the club histories skew away from impressionistic memories that can be clouded by nostalgia. Seeing who was actually booked, the status of that performer at the time--as opposed to how important they would become later--gives a clear picture of the economic forces of any club, and in turn can be revealing about the city and the regional rock scene at the time.

I would not have been able to complete all this work without the assistance of co-conspirators. The Chicken On A Unicycle website has been a joint effort. As to the blogs, the Comment Threads are filled with detailed updates from known and unknown participants, greatly enhancing the scholarship.

This tracker has links to various associated pages on Chicken and specific blog posts. Here and there I also link to a few other posts by others that fulfill my needs. Some forthcoming posts are listed (without links yet, of course) in anticipation of the future.

Berkeley Rock Nightclubs
The Jabberwock, 2901 Telegraph Avenue, Berkeley, CA 1964-67
The Jabberwock was a folk club, but it gave birth to Country Joe and The Fish.

The Questing Beast, 2504 San Pablo Avenue, Berkeley, CA: Performance History 1965-66
County Joe and The Fish got started at the Jabberwock, but they went electric at the Questing Beast.

New Orleans House, 1505 San Pablo Avenue, Berkeley, CA Performance Listing 1966-1970
The New Orleans, opened as a home for New Orleans-style jazz, rapidly became a rock club by 1966. It was the primary nightclub for original rock music in Berkeley throughout the 1960s. We attempt to identify every performer from 1967 to 1969, and its an excellent survey of original California rock bands just one tier below the Fillmore and Avalon.

Mandrake's, 1048 University Avenue, Berkeley, CA Performance List 1965-1973
Mandrake's, a converted pool hall on University and San Pablo, mainly presented blues and jazz, but by the end of the 1960s, it presented a lot of rock as well.

The Long Branch, 2504 San Pablo Avenue, Berkeley, CA Performers Listing May-December 1971
The Long Branch, at the infamous Berkeley music address of 2504 San Pablo, expanded the building and replaced the Babylon in May 1971. This post is a detailed discussion of every performer who was known to have played the Long Branch in 1971, even if some dates are uncertain. 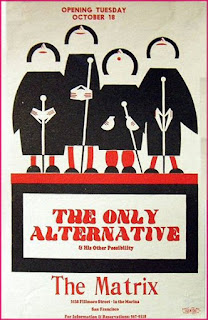 San Francisco Rock Nightclubs
The Matrix, 3138 Fillmore Street, San Francisco, CA Performance Listing 1965-70
The Matrix was San Francisco's first, and for a while only, hippie rock night club. This page is a list of performers at the Matrix, to the best of our knowledge.

The Matrix, 3138 Fillmore Street, San Francisco, CA: Performer Listing January-June 1970 (Matrix I)
This post provides a detailed  analysis of all the known performers at the Matrix during the first half of 1970. As the tiny Matrix became a less lucrative gig, the club turned into a musician's hangout and the music played was pretty interesting. Not least--besides Bruce Springsteen dropping in--Jerry Garcia began his long collaboration with bassist John Kahn.

The Matrix, 3138 Fillmore Street, San Francisco, CA: Performer Listing October-December 1970 (Matrix III)
The Matrix is in decline a club, but it is all the more fascinating for having become Jerry Garcia's hangout. 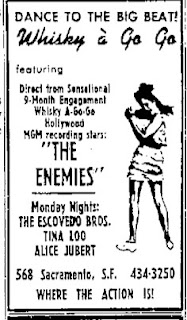 Bay Area Rock Nightclub Survey, May-September 1974
A snapshot of Bay Area rock nightclubs in 1974, including analysis of performers at The Great American Music Hall (May), the Boarding House (June), the Orphanage (July), the Inn Of The Beginning in Cotati (August) and the Lion's Share in San Anselmo (September). 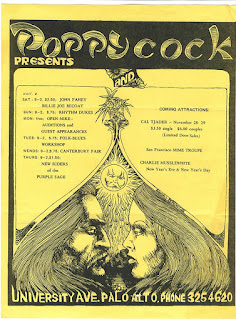 Palo Alto Rock Nightclubs
Palo Alto Psychedelic Rock Shows, 1965-66 (Palo Alto I)
Palo Alto, to hear Palo Altans tell it, was the birthplace of psychedelic rock. Palo Alto's first rock nightclub was The Big Beat, at 998 San Antonio Road. Right before it opened, the club was rented by The Merry Pranksters for the Palo Alto Acid Test on December 18, 1965, with the Grateful Dead providing the music. The Big Beat was never that interesting again.

Palo Alto Psychedelic Rock Shows, 1968 (Palo Alto III)
In 1968, the modest Poppycock books a lot of good Bay Area rock bands. I review the status of all the known performers from the year.

Palo Alto Psychedelic Rock Shows, January-June 1969 (Palo Alto IV)
Rock music is exploding in the Bay Area, and some really good bands play the Poppycock. The club is starting to seem on the small side, however. This post identifies all the Poppycock performers from the first half of 1969.

Palo Alto Psychedelic Rock Shows, July-December 1969 (Palo Alto V)
In the second half of 1969, the Poppycock has become too small to compete with other venues. Some really good bands play the club on weeknights, some that really interest us today, but the club was wearing out its welcome in downtown Palo Alto. It would close quietly in mid-1970.

In Your Ear, 135 University Avenue, Palo Alto, CA: Performer Listing, May 1971-December 1972
In Your Ear opened at the site of the Poppycock (135 University). Nominally, it was a jazz club, but it had a broad booking policy that included jazz, blues and rock. A fire on New Year's Eve 1972 closed the club. Fellow scholar CryptDev has the details of all the known performers.

Homer's Warehouse, 79 Homer Lane, Palo Alto, CA: Performer Listing 1971-73
Quiet Palo Alto did not like the noisy rock of the Poppycock downtown. A few blocks away, and quite literally across the railroad tracks, Homer's Warehouse booked bands in a quonset hut that was formerly a warehouse. The fun lasted until 1973. CryptDev has what details survive of the known performers.

Sophie's, 260 S. California Avenue, Palo Alto, CA: Performer Listing 1976
After a quiet period, rock music returned to Palo Alto. This time, however, it wasn't downtown, but rather on the main street of what was formerly Mayfield, the rowdy predecessor to Palo Alto. Sophie's opened in 1975. I review the performers in 1976, when the club was migrating from just being a Top 40 dance bar to an original music club (Sophie's would become the Keystone Palo Alto in 1977).

Palo Alto Rock History Navigation
I have a page listing all my Palo Alto and South Bay posts, including Night Clubs, other venues and some bands.

Whisky A-Go-Go, Washington and Murphy, Sunnyvale, CA: Fall 1965
Briefly, there was a franchise of West Hollywood's legendary Whisky A-Go-Go in suburban Sunnyvale, between San Jose and Palo Alto. It only lasted a few months--but we have photos.

Wayne Manor, Washington and Murphy, Sunnyvale, CA: 1966-68
The Sunnyvale Whisky closed, and then re-opened as Wayne Manor, a Batman-themed club. At the time, the comic book was a popular TV show.

Frenchy's, Hayward, CA: Performance Listings, January-June 1966
There were very few rock clubs booking original music in the Bay Area in early 1966, but Frenchy's, at 29907 Mission Boulevard in Hayward, was one of them. Far more interesting than you might think.

Chateau Liberte, 22700 Old Santa Cruz Highway, Los Gatos, CA
The Chateau Liberte was a legendary early 1970s nightclub, but I have been unable to find a consistent source for bookings. This post is a meditation on the peculiar economics of the club itself (with a picture of the Zig Zag Man swimming pool).

The Red Ram, 444 E William St, San Jose, CA
I know very little about this place, except that the pizza joint near San Jose State booked rock bands for a few months in 1970. At this time (early 1970), there were no nightclubs in San Jose booking original rock bands.

Lion's Share, 60 Red Hill Avenue, San Anselmo, CA: Performance Listings April-June 1971
The Lion's Share was just a local musicians hangout, but since it was in Marin County, it was a happening place for a while. 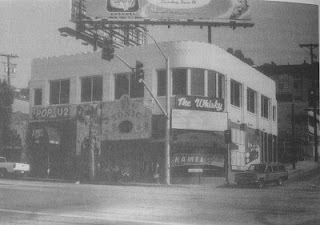 Whiskey A-Go-Go, 8901 Sunset Blvd (at Clark), West Hollywood, CA: January-June 1971 Performance Listings (Whisky I)
Rather unexpectedly, with the rise of The Troubadour, the Whisky becomes the home for Jazz-rock and Prog bands.

The Trip, West Hollywood, CA: Performers List 1965-66
Elmer Valentine, the proprietor of the Whisky A-Go-Go, had another West Hollywood club, The Trip (at 8572 W. Sunset). The Trip was more attuned to the psychedelic era, and the Valentine migrated the booking policy of The Trip over to the Whisky.

Thee Experience, 7551 Sunset Blvd, Los Angeles, CA: Performance List March-December 1969
Thee Experience was an intriguing competitor for The Whisky A-Go-Go, but it was only open for several months in 1969. 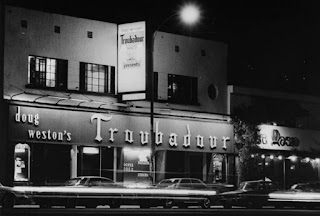 The Troubadour, West Hollywood, CA Performance List January-April 1970 (Troubadour I)
The Troubadour had been open (in some form) since 1957, and while generally a folk club, it took on critical importance in the early 1970s. If rising singer-songwriters wanted to make it big, they had to play the Troubadour. 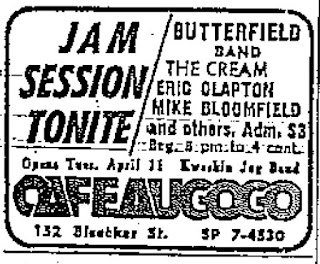 Boston Psychedelic Rock Concert Chronology, January-June 1967 (Boston I)
This chronology includes all of the "major" underground venues for psychedelic rock shows, including the Tea Party and the colleges.

Band Performance Histories
The performance history of some smaller bands gives us a good snapshot of  Bay Area venues at the time, including the various clubs.

Phoenix/Mt Rushmore
There was a tangle of related bands, the Vipers, Universal Parking Lot, Blue House Basement, Phoenix, Mt. Rushmore and Potter's Wheel. We sort them out.

James And The Good Brothers: Overview and Performance Listings, 1970-71 (Next Riders I)
The Canadian trio of James Ackroyd and Bruce and Brian Good met the Grateful Dead on the Festival Express, and Jerry Garcia invited them to San Francisco. For about a year, the band was part of the extended Grateful Dead family.

Lost Horizons
The Lost Horizons series are intriguing bits of research where the story remains just out of reach.

Nightclub Events
These posts are about specific events at (mostly) Bay Area nightclubs. Included for completeness.

North To San Francisco: The Warlocks in The South Bay, 1965

1048 University Avenue, Berkeley-Mandrake's
527 comments in the thread, read them all (really)