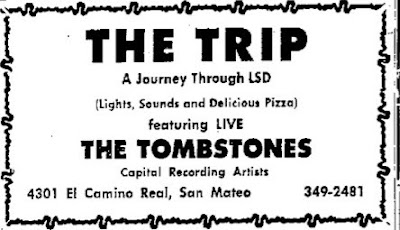 As Bill Graham's Fillmore and Chet Helms's Avalon became increasingly successful, the entertainment scene in the more staid Peninsula felt the whiff of change. While most of the El Camino Real bars styled themselves as Las Vegas Lounges--if without the gambling--with dinner, drinks and dancing, a few entrepreneurs started looking for a different audience. One of the sharpest of these was Yvonne Modica, a successful restauranteur since the 1950s. She had opened The Big Beat in South Palo Alto, and it had been an almost immediate success. Her next venture, The Trip, in San Mateo, was the first overt attempt in the South Bay to commercially exploit the San Francisco underground.
Modica opened The Trip about a year after she opened The Big Beat in Palo Alto. The Palo Alto club opened around Dec 21, 1965, and The Trip opened November 22, 1966 (the article above is from the November 11 San Mateo Times). It followed the model of The Big Beat by having pizza and beer to go with the dancing, with an after hours jam session from 2-6am on Saturday and Sunday mornings. However, the club's name overtly identified with the underground rock scene in San Francisco. Just in case you missed the reference, the ad says "A Journey Through LSD--Light, Sound, Delicious Pizza." There seems to have been some version of a Fillmore-style light show.
4301 El Camino Real, on the main street for the whole South Bay (El Camino Real runs from South San Francisco to Santa Clara), had formerly been a place called "Big Al's Gashouse." The Gashouse, also a pizza-beer-entertainment join, was at least thematically connected to a well-known San Francisco club on Broadway called Big Al's. Various local bands had played Big Al's, including the Vejtables and The Warlocks, but the venue burned down in early 1966.
The Trip was only open until early 1968, when Modica re-opened it under the name "Souled Out," going for more of a rhythm and blues sound. A South Bay resident at the time told me that one of the problems with these El Camino bars trying to be "hip" was that they were kind of expensive for hippies surviving hand to mouth, and in any case since you had to drive you may as well go to the Fillmore or Avalon, just a few more miles up the road. The Big Beat was pretty far from San Francisco, but that isn't true for San Mateo. In any case, many of the Fillmore and Avalon patrons were too young to get in a bar, thus creating another limitation for The Trip.
One thing that Modica and others missed in trying to export psychedelia to the suburban South Bay was that the Fillmore experience doesn't work without a good band, preferably one that likes to jam. Modica regularly presented the same groups at The Trip that she did at The Big Beat. While I don't know much about The Tombstones, the peripheral evidence suggests that they were a typical South Bay dance band--they probably played a lot of rock and roll and Motown covers, probably pretty well, but they weren't the sort of band that people went out of their way to see. However delicious the pizza may have been, people looking for a transcendent experience were more likely to get it from the wide open explorations of The Dead or Quicksilver, despite any sloppiness, rather than the efficient cover versions of a dance band.
4301 El Camino Real is now the site of a used car dealer called Auto Access.
Posted by Corry342 at 10:23 AM