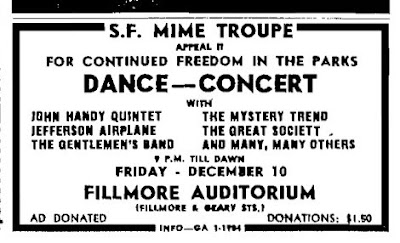 The second benefit concert for the San Francisco Mime Troupe has passed into legend as the first rock concert that Bill Graham produced at the Fillmore Auditorium. The history and background of the show is a well-told story, so I will not repeat it here. The interesting part about the above ad, from the San Francisco Chronicle of December 5, 1965, is that it may be the first published advertisement--as opposed to a poster or flyer--for a Bill Graham rock concert. In any case, I have never seen a reproduction of this ad, and I would be surprised if it was widely known.

Publishing technology in 1965 was considerably more primitive than it was later (much less today). Many entertainment ads were typeset and laid out by the newspaper itself, based on copy provided by the advertiser. The format of this ad was identical to numerous ads that I have seen in the Chronicle in the 1965-67 period, with identical fonts, the venue name in larger type, and the phone number in the bottom border. It was difficult and financially prohibitive for a venue to provide different art each week, and they wouldn't have reproduced well in the newspaper anyway. The fact that the Great Society is listed as The Great Societt is merely a sign that the layout man couldn't read someone's (probably Bill's) handwritten copy.

Everyone also forgets that the John Handy Quintet was the biggest name on the bill for "Appeal II". The Jefferson Airplane were a popular local group, but they had been performing for a total of four months, and most pop groups had a half-life of about two years in those days. Handy had been a San Francisco State student in the mid-1950s, had gone to the East and made his name with Charles Mingus and others, and had returned to San Francisco as an important local jazz figure. Now, of course, the Jefferson Airplane and The Great Society (with Grace Slick) outrank Handy, and among the "many, many others" were a Palo Alto band called The Warlocks (not to mention a lesser-known Palo Alto band, The Vipers, who evolved into Mt. Rushmore). However, the idea that these groups would outshine an established jazz figure like Handy was probably unthinkable at the time.

Note also that in the lower left hand corner of the clipping it says "Ad Donated." The Mime Troupe case was seen as a Freedom Of Speech issue, and newspapers in the past were generally always concerned about defending Free Speech. The rather conservative Chronicle publishers would not necessarily have approved of the Mime Troupe's actual performances, had they ever seen them, but newspapers used to be jealous of their right to speak freely. Marty Balin's roommate was Bill Thompson, who worked as a Copy Boy (gofer) for Chronicle columnist Ralph Gleason, who was a supporter of the Mime Troupe and Free Speech, so its not hard to see a direct line to how the Chronicle came to contribute an ad. Nonetheless, given the Fillmore history, its surprising to see a simple black and white text ad promoting a Bill Graham show with the Airplane and "many, many others," only the barest hint of what was to come.
Posted by Corry342 at 8:57 PM 5 comments: