I have published a large number of blog posts about the 1960s and 70s rock history of Palo Alto, CA. The posts are scattered about several different blogs, and go back many years. They do a tell a story, of sorts, when seen together, so I have gathered them here. I had to do this for my own purposes, so it made the most sense to make this generally accessible.

The posts below are about the rock history of Palo Alto, Stanford University and some nearby towns. They cover landmarks, events and bands. Since bands don't really have a location, I have been broad-minded about what counts as a Palo Alto band. My one exception has been the Grateful Dead, where I have only noted them in relation to events actually occurring in or around Palo Alto. Here and there I have included posts from other scholars' blogs, where they have fit my scholarly interests. Nevertheless, I am not trying to make a complete list of other people's posts about Palo Alto, just mine. I have included a number of posts that are planned or in development, but not yet complete, in order to give a fuller picture.

I have included some material about San Mateo County and the Peninsula, mostly from 1966 and earlier, since it wouldn't fit anywhere else.

Palo Alto Psychedelic Rock Shows 1965-66 (Palo Alto I)
The Beatles stayed at the Cabana Hotel in August, and The Grateful Dead had an Acid Test on December 18, 1965. And so it began.

Palo Alto Psychedelic Rock Shows 1967 (Palo Alto II)
The Poppycock opens at the Western end of University Avenue, and downtown has a rock club. The city of Palo Alto holds some free "Be-In" concerts in the downtown park.

Palo Alto Psychedelic Rock Shows January-June 1969 (Palo Alto IV)
The Poppycock hits its high water mark in the first half of 1969, and University Avenue in downtown Palo Alto is almost, kind of, a happening place, at least at the Western end.

The Tombstones (South Bay 1966)
The Tombstones were not particularly important, in the scheme of things, but they were more or less the first "house band" at The Big Beat, which was Palo Alto's first rock club.

The Flowers>Solid State: South Bay Psychedelica 1966-68
The Flowers (later called Solid State) were actually from San Jose, but they were the house band at The Poppycock in 1967, and played the major Palo Alto Be-Ins. Along with the Ken Kesey connection, they were a significant part of the Palo Alto rock story (even if they mainly played jazz).

The Good News-Performance History 1966
The Good News were from Redwood City, two towns over (Northwards) from Palo Alto. They were the first Peninsula band to have their own light show (mainly strobe lights), and their membership included a number of players who went to other bands (Dave Torbert, Tim Abbott and Chris Herold).

David Nelson and The New Delhi River Band, July 1967-February 1968 (David Nelson IV)
Guitarist David Nelson, later famous as a founding member of the New Riders of The Purple Sage, was a critical part of Palo Alto's rock music history. Nelson, after working with Jerry Garcia in numerous bluegrass ensembles in 1963-64, ended up forming the New Delhi River Band, the second psychedelic blues band to come from Palo Alto. The NDRB story is our best insight about the underground rock scene in the South Bay in 1966 and '67.

Petrus w/Ruthann Friedman and Peter Kaukonen (Half Moon Bay, CA-1968)
Petrus seems to be about the only 60s rock band to ever make it out of Half Moon Bay. 60s bands on the Peninsula that were playing original music had to revolve around Palo Alto somewhat, as there were no other real options at the time.

Jerry Garcia, The New Riders Of The Purple Sage and Peninsula School 1961-71
Peninsula School was (and still is) a forward looking K-8 school in Menlo Park, right near the Palo Alto border. Not surprisingly, it turns out to have numerous direct and indirect connections to Jerry Garcia.

Summer 1965, The Top of The Tangent, 117 University Avenue, Palo Alto, CA: The Warlocks
The Top Of The Tangent, at 117 University Avenue, provided the launching pad for not only Jerry Garcia's career, but numerous other future Fillmore rockers as well. While it was a folk club, it played a critical role in the rock history of Palo Alto (and, in fact, the electric Warlocks actually played there in the Summer of 1965).

Tales from In Your Ear – Live Music in downtown Palo Alto 1971-72
Fellow scholar CryptDev has done an excellent job reviewing the performers at In Your Ear, the club that replaced the Poppycock in 1971-72. In Your Ear styled itself as a jazz club, but its actual musical offerings were broader than that

Live Music in Palo Alto1971-73 - Across the Tracks at Homer's Warehouse
CryptDev also reviews what can be discerned about the last gasp of downtown Palo Alto rock and roll, at Homer's Warehouse. Homer's Warehouse was a beer joint in a Quonset Hut behind the Town and Country shopping center, actually a better place for rock and roll than University Avenue. It was open from 1971 to '73. Ultimately, rock music in Palo Alto moved over to California Avenue (to Sophie's, which became Keystone Palo Alto, The Edge, Illusions and perhaps a few other names). I will eventually get to the Keystone Palo Alto story.

July 2, 1967, El Camino Park, Palo Alto, CA: Mary Poppins Umbrella Festival and Be-In
Palo Alto's second most legendary rock event (the first was the Beatles spending the night at the Cabana in 1965). The Grateful Dead played a free Be-In concert in downtown Palo Alto's biggest park. Researching this seemingly lost event was one of the reasons I began blogging.

October 5-6, 1968 San Francisco International Pop Festival, Searsville Lake, Palo Alto, CA: Traffic/Iron Butterfly/Blue Cheer/Country Joe and The Fish/Steve Miller Band (canceled)
Stanford University blocked a plan by promoters to have a rock festival at Searsville Lake, right near campus. Tickets had actually been sold before the University canned it. It would have been a debacle. A legendary debacle, though.

New Riders Of The Purple Sage, Peninsula School, 920 Peninsula Way, Menlo Park, CA May 19, 1970
CryptDev's remarkable photos provide a trip back in time, when Jerry Garcia and the Riders played in the afternoon at Peninsula School. 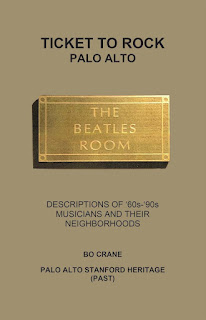 Other Resources
Anyone who has scrolled down this far needs to know about the book Ticket To Rock, by Palo Alto historian Bo Crane. Crane identifies the houses and histories of numerous Palo Alto rock musicians (without embarrassing current residents by giving out exact addresses, which is commendable). Contemporary photos, too. The book is published in conjunction with the Palo Alto Historical Association (PAHA) and the Palo Alto Stanford Heritage (PAST). Order details are here.

North To San Francisco: The Warlocks in The South Bay, 1965