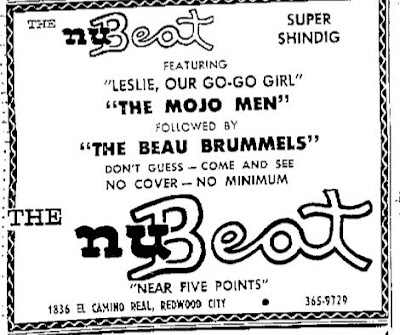 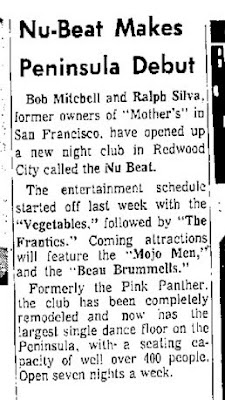 The Nu Beat club in Redwood City was only open for about four months in 1966, and its successor, The Spectrum, was only open for a few months later in 1966. While not an important venue in its own right, The Nu Beat is an interesting snapshot of the different ways in which entrepreneurs tried to capture rock music's entertainment dollars. While Bill Graham and Chet Helms, just up Highway 101, were figuring out the Fillmore/Avalon model that would define live rock until the present day, numerous other participants had their own plans.

The article and ad above are from the San Mateo Times of January 7, 1966. As a comparison, remember that The Beatles Rubber Soul album had been released the month before (December 1965), LSD was still legal, and while Bill Graham had put on his first benefit at the Fillmore (December 10, 1965), The Trips Festival had not yet been held (Jan 21-22-23) and the underground rock scene that would lead to the Fillmore and Avalon was still quite nascent. Bobby Mitchell and his partner Tom Donahue were djs on KYA-am, the #2 music station in the San Francisco market (KFRC was #1), and they also promoted concerts, owned racehorses and had their own record label. Autumn Records had hit with The Beau Brummels, among others, and their house producer was Sly Stone.

Donahue and Mitchell had had a topless club in North Beach called Mother's (at 430 Broadway, alluded to in the article), but it had closed. The Nu Beat seems to have been an attempt to move North Beach's "glamor" to the staid suburb of Redwood City. I know almost nothing about the club save for this article and some ads, but here's what I can discern:


The tricky part of this business model was that rock mostly appealed to teenagers, and they couldn't attend a club where drinks were sold. Conversely, in 1966, no one over the age of 29 listened to rock music.

The Frantics, listed in the article as one of the initial acts, probably playing New Year's Eve, were a Tacoma band that moved to San Bruno (improbably enough). Band members at this time included guitarist Jerry Miller and drummer Don Stevenson, both of whom would be in Moby Grape and playing the Avalon by the end of the year. Its not impossible that the Frantics bassist was Bob Mosley, also a future Grape, but his timeline isn't so certain.

In subsequent ads I have seen for the Nu Beat (all in the San Mateo Times), the acts were Autumn Records acts, except in the first two weeks of March when the featured act was The Justice League of America. Justice League of America was led by guitarist Ron Cornelius, later a vastly successful bandleader and Nashville producer. The ads abruptly cease in early April.

I am pretty certain that the ads for the Nu Beat ceased in April because Mitchell and Donahue's empire was shut down by creditors--apparently their penchant for racehorses was one of the problems. Autumn Records artists like The Vejtables and The Mojo Men were surprised to find the Autumn Records offices padlocked in early April. I have to assume the rest of their empire, including Mitchell's Nu Beat, went with it.

Sometime later in 1966, the club reopened under the name The Spectrum. I know almost nothing about it, but as a mark of the times, future Moby Grapers Miller and Stevenson played the club regularly, but this time under the name Luminous Marsh Gas. Miller, Stevenson and organist Chuck Schoening dropped the Frantics name and added singer Denise Kaufman and immediately started playing spacier blues. They mainly played two places on El Camino, The Spectrum and The Syndrome in Burlingame. I only know the location of The Spectrum because an eyewitness recalls seeing them there, and recalls the location.

1836 El Camino Real in Redwood City is near a place known as "Five Points," mentioned in the ad, where Woodside Road, El Camino Real and Main Street intersect. The site is now a Holiday Inn Express.
Posted by Corry342 at 9:17 PM