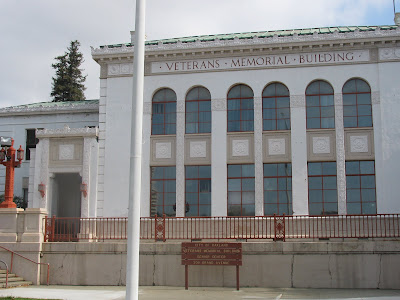 The Veterans Memorial Building in Oakland, on 200 Grand Avenue (at Harrison St), just across from Lake Merritt, was only used for rock shows a few times in 1966. There were a few "teen" dances, and two "psychedelic" shows. The relatively nondescript flyer for one of these obscure shows has circulated quite widely.

The Oakland Veterans Memorial Building is a beautiful, 1930s era auditorium with a basketball court in the middle, like a high school gym. It would only fit a few hundred patrons. The building has been restored since the 1960s, but was probably somewhat rundown. Although the Lake Merritt area is beautiful in the daytime, it was probably somewhat seedy at night during the 1960s. Certainly by the late 1970s the area was genuinely dangerous at night, although by the mid-1980s, when I moved to the area, the city of Oakland had taken major steps to improve the area, and now it is a wonderful area.

As a result of the venue's small size and unappealing location, I know of no other rock shows at the Oakland Veterans Memorial Building. Now nicely restored, it is used for community athletic and social events.
Posted by Corry342 at 10:02 AM