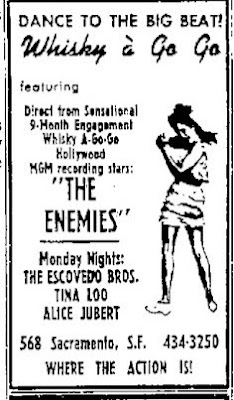 The Whisky A-Go-Go in West Hollywood is rightly revered as a seminal club in the history of rock music. It is a little remembered fact, however, that owner Elmer Valentine appeared to have franchised the name and style of the club (or "The Brand" as we would now say) to other operators outside of Los Angeles. There was a Whisky A-Go-Go in Chicago, and I believe in Atlanta, and one in San Francisco, all largely forgotten.

The San Francisco club was at 568 Sacramento Street (at Montgomery), right near downtown but somewhat far from the action on North Beach. The earliest evidence I have seen of it is the first week of 1966, from which the article (left) about the engaging Ms. Tina Loo's dancing ability was drawn (San Mateo Times, January 7, 1966). The last I know of it was February, 1967, when The Doors played a few dates, quickly replaced by The Wildflower. I have seen a few other ads from the San Mateo Times in early 1966, of which the above (from February 11, 1966) is typical.

Other than these scattered facts, I know very little about the San Francisco Whisky, or anything at all about the other Whisky "franchises." However, the little information I have about the San Francisco Whisky does show how the "business model" of an entertainment vehicle depends so much on the operator, not the model. I have written extensively about performers at the Whisky from 1966 to 1969, and while they were only paid union scale, they were the coolest and most interesting bands in Los Angeles, whether living there or just visiting. West Hollywood was where the cool people were, and the Whisky became a hangout and taste-making club. In an entirely different way, the same could be said of the Fillmore and The Avalon in San Francisco.

Conversely, however, a bunch of unhip lounge bands and pretty go-go dancers in San Francisco's Financial District seems to have made an impression on no one. Elmer Valentine's booking policies made the Whisky what it was, and the style and the girls were just icing (if delicious at that). By the same token, Fillmore-style clubs never made it financially in Southern California, because despite plenty of good bands it lacked the focus that the Fillmore and Avalon brought to San Francisco.

I know that by the time The Doors played the SF Whisky it had become a topless joint, and after there were only a few patrons at their first gigs (on February 14-15, 1967), The Doors handed off their booking to The Wildflower. I think the SF Whisky folded soon after that. To this day, I have no idea who financed or ran the San Francisco Whisky.