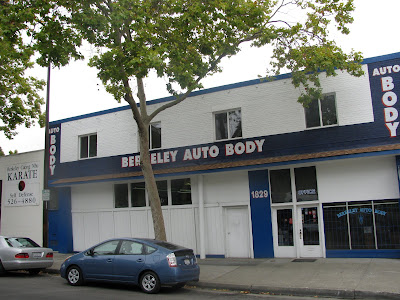 The Freight and Salvage is Berkeley's premier traditional music club, open continuously since 1968. Originally opened to provide a forum for folk music traditions after similar venues in Berkeley had closed or migrated to rock, the Freight is now a folk tradition of its own.

This is the original site, at 1827 San Pablo Avenue, now Berkeley Auto Body at 1829 San Pablo. The building was called The Freight and Salvage, and founder Nancy Owens chose to keep the name so the club could keep the Yellow Pages listing. I have written extensively about performers at the original site in the first two years of the Freight's existence.