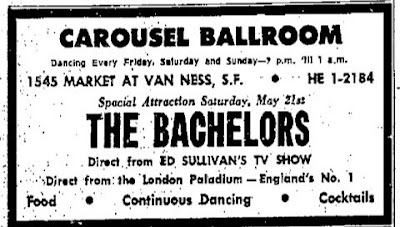 The Bachelors were an Irish singing group popular in the United Kingdom, with some following in the United States. This ad from the May 13, 1966 edition of the San Mateo Times has no significance from a rock perspective, except insofar as this is the future site of The Fillmore West.

Various San Francisco bands formed a consortium in early 1968 to compete directly with Bill Graham's Fillmore and Chet Helms's Avalon. They leased the Carousel and Grateful Dead staff largely ran it. Despite best intentions and great bills, the venue rapidly turned into a financial mess. The Carousel was owned by an Irishman, and Bill Graham apparently flew to Ireland to wrest the lease away from the bands. He succeeded, and moved his Fillmore operation to the much larger Fillmore West.

All that was in the future, however. In 1966, The Carousel Ballroom, once the El Patio, was a pale reflection of its former glory, but still served as a ballroom, as the above ad shows. The site is currently a Honda dealership.
Posted by Corry342 at 3:33 PM