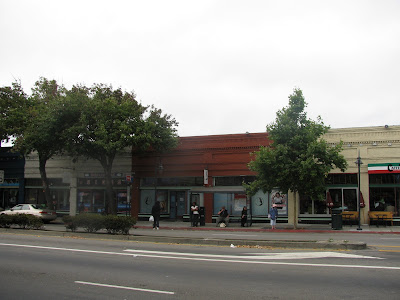 2504 San Pablo Avenue in Berkeley (at Dwight Way) was a music venue in Berkeley more or less continuously from 1963 to about 1976. Use Permits in California make it a lot easier to open a venue in a building that has already received permission to be a live music venue.

This photo was taken August 11, 2009. 2504 San Pablo is the building with the brown facade, behind the bus stop. For many years it has been a retail store called Good Vibrations. You can google it, but don't do it at work.

January 1963-Early 1965: Cabale Creamery
A folk club founded by Rolf Cahn, Debbie Green, Howard Zeem and Chandler Laughlin, one of the principal folk stops on the West Coast in the early 60s.

November 1965-May 1966 The Questing Beast
A folk club with a psychedelic twist to it. A few local rock bands played there, including an embryonic Country Joe and The Fish, and there may have been an Owsley Stanley connection. A Grateful Dead tape listed as "Questing Beast Rehearsal 2-11-66" is spurious, but the Dead may have been considering using the Beast for a rehearsal hall prior to their departure to Los Angeles with Owsley in February 1966. The city Public Health department closed the club.

1967-69 Tito's
Tito's was more of a "joint", a place that featured dancing to local bands. Most of them were unknown, although a few (like The Loading Zone) became well-known later. The bookings--at least of bands that were known--seemed to lean more towards R&B or funky jazz.

1970-76 (approximately) The Longbranch
The Longbranch was a hard rock club. East Bay bands like Earthquake, Greg Kihn and Eddie Money were regulars at the venue. At one point in the early 70s, a lot of reggae bands played at the club, including groups like Toots And The Maytals, then quite unknown. A few touring acts filled in their itinerary with gigs at the club, usually when they were opening a show at Winterland or a similar venue, and had room for an extra gig.
Posted by Corry342 at 11:57 AM