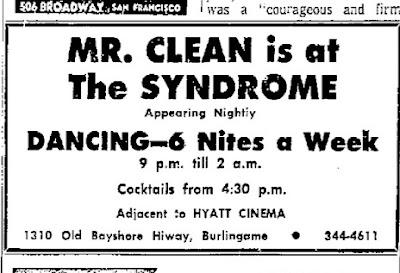 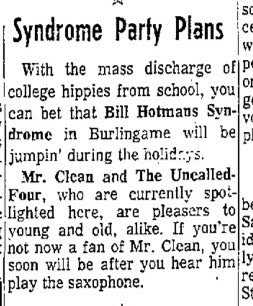 The Syndrome in Burlingame was another effort to try and accommodate the burgeoning rock underground flowering in San Francisco into the South Bay Area Peninsula. This obscure club has only been noted historically because it was a regular venue for a Moby Grape predecessor called Luminous Marsh Gas. A Tacoma, WA band called The Frantics had moved to San Bruno (of all places), but by 1966 the "Northwest Sound" was migrating towards a spacier, bluesier sound. The members of The Frantics, guitarist Jerry Miller, organist Chuck Schoening (aka Chuck Steaks) and drummer Don Stevenson, added singer/harmonica player Denise Kaufman, well before she was in The Ace Of Cups. They took their name from a peculiar news articles that suggested that UFO sightings were really Luminous Marsh Gas. By the end of 1966, Miller and Stevenson would be playing the Fillmore and The Avalon as members of Moby Grape, but in the middle of the year they were still playing The Syndrome.
In 1966, there was a club attempting to attract the hip rock audience every several miles in the South Bay. In South Palo Alto there was The Big Beat, in Redwood City there was The Spectrum (previously The Nu Beat), in San Mateo there was The Trip and in Burlingame there was The Syndrome. Articles in the San Mateo Times (such as the ones above from June 10 and December 16, 1966) make it clear that the club emphasized "psychedelic" lighting to create an "experience." The December, 1966 article says that "With the mass discharge of college hippies from school, you can bet that Bill Hotmans Syndrome in Burlingame will be junpin during the holidays." The Syndrome clearly recognized that they were aiming at the "hippie" market, but they seemed to missed the target. The original proprietor, Joe Gannon, had been the road manager of The Kingston Trio, so he was not a fuddy-duddy old man, but he still seems to have overestimated the reach of the underground. I do not know if Bill Hotman was a new owner or simply a manager.
For one thing, many hippies did not have much money, not enough to afford to hang out in bars. For another, the location of The Syndrome on the South Bay's main drag, El Camino Real, required a car, and if you had a car, why not see the Dead or Big Brother at the Avalon or The Fillmore, just a few miles up the road? Furthermore, many of the hippest rock fans were under 21, in many cases well under 21, and not able to get into a bar. Finally, the Fillmore and Avalon had bands that were perceived as cool, that made people want to go out and see them. The primary act that was advertised at The Syndrome was Mr. Clean (the above is from November 25), a soul combo headed by former NFL player and saxophonist/vocalist Ollie McClay. While no doubt McClay was a fine musician (lounge musicians usually are), he didn't have the underground cachet that the Fillmore bands did.
It is ironic that Luminous Marsh Gas, with two future members of various Fillmore bands, who apparently played the club regularly but were not advertised in the paper, probably had the talent and underground cred to make The Syndrome into a happening place, but the proprietors were unable to capitalize on it. According to Kaufman, the band was already playing some nascent Moby Grape material, including the great song "Murder In My Heart For The Judge."
The Syndrome was only open from June 1966 until July 1967. It was replaced in August of 1967 by a Greek restaurant called Zorba's.
Posted by Corry342 at 10:58 AM