The San Francisco Bay Area band Petrus, which seems to only have existed in the Spring of 1968, was hardly a major band. They never released an album, and I have only been able to find evidence of a small number of shows. Still, despite their low profile, they are fairly intriguing. In this post, I have attempted to put together what I could find out about the band.

Petrus was based in El Granada, near Half Moon Bay, of all places, on the opposite side of the hill from San Mateo. The lead guitarist was Peter Kaukonen, Jorma's brother. Peter had been Jorma's first choice as electric bassist for the Jefferson Airplane back in October '65, but Peter had had to stay in Stanford to avoid the draft, so the bass chair had gone to Jack Casady instead.

More intriguingly, the lead singer and principal songwriter of Petrus was Ruthann Friedman. Friedman was an interesting Los Angeles songwriter, best known for writing "Windy," which hit #1 for The Association in July 1967 (when you hear it, you'll realize that everyone knows it's "Windy").

Friedman (b.1944), from the Bronx, had moved to Southern California as a young teenager. She had fallen in with the young folk crowd, playing guitar and singing. After 1964, she bounced around a bit, first to Denver and then to San Francisco in 1966.

Around the time that Signe Anderson left Jefferson Airplane (October 1966), Ruthann was living in Haight-Ashbury with members of the band. She was briefly considered to be their new vocalist. “The Jefferson Airplane gave me enough money to buy boots… They didn’t take me, which was smart. I mean, Grace Slick, how can you turn that down? While I was up there, I sang with Country Joe and the Fish at the Avalon Ballroom and learned the pleasures of Southern Comfort from Janis Joplin and purple acid from Owsley.”

Back in Los Angeles by1967, Friedman began working with various Los Angeles players, including songwriter Tandyn Almer, who had written "Along Comes Mary" for The Association."

“Tandyn asked me if I’d like to come in and sing on a Goodyear tire commercial. It was a parody of Nancy Sinatra’s hit, (sings "These tires are made for walking"). Soon after Tandyn asked Ruthann to sing on a new song he wrote with John Walsh called “Little Girl Lost–and–Found.” “I fell in love with that song. Tom Shipley [of Brewer & Shipley] and I sang the vocal parts. It was Tandyn and Larry Marks’ studio project. Why they didn’t release it under my name I could never understand. That could’ve been my entrée.”

“Little Girl” was issued by A&M in April 1967 under the moniker The Garden Club and the single was a regional success, especially in Los Angeles where it received a significant amount of airplay. As a result, Ruthann was asked to form a live “Garden Club” to help promote the record. Jorma Kaukonen (Jefferson Airplane) suggested his brother Peter for the “Club.” As a result, Ruthann and Peter became fast lovers, traveled up and down the coast, and formed a band called Petrus.

Concurrent to this activity, Ruthann received a call from Association member Jim Yester’s wife, Jo-Ellen, inquiring if she had any songs suitable for them to record. Ruthann suggested a new tune she had written while living in a single underneath David Crosby’s house on Beverly Glen. “It only took me 20 minutes to write, and I wrote it as an escape."

“Windy” went to Number One in July 1967, staying there for four weeks, and reached Number 3 on Billboard’s Top 100 Songs of 1967. “I ended up not getting any of the publishing, and if I had a decent person representing me, I would’ve made out much better.


I have only found traces of a few Petrus shows in the Bay Area, and the Carousel one seems to be the most notable. Petrus broke up later in 1968, as did Peter and Ruthann. Friedman went on to release one interesting solo album in 1970, Constant Companion, which included some co-writing credits, guitar parts and cover art from Peter Kaukonen. Friedman only recorded and performed intermittently after that, but she is still around. Peter went on to play with Hot Tuna, Jefferson Starship and even the final version of the Jefferson Airplane, and has continued to have a long and interesting musical career. If there are any lost Carousel tapes in the Owsley Archives, I hope Petrus is one of them. If they had recorded, the combination of a famous songwriter and a talented Kaukonen could have been interesting indeed.

I think Petrus was a conventional rock quartet, with Peter Kaukonen on lead guitar, Ruthann Friedman on gutar, and a bassist and drummer. But I don't even know that for sure.

March 1-2, 1968 Straight Theater, San Francisco, CA: Charlie Musselwhite/Santana Blues Band/Petrus
The Straight Theater was at 1702 Haight Street, in the heart of the Haight-Ashbury. By the time it had opened in late 1967, however, the hippies had moved out of the Haight, and the neighborhood itself had declined. Kids from the suburbs, the real rock audience, weren't going to drive all the way into the neighborhoods. The Straight, though fondly remembered, floundered as a business. A lot of cool San Francisco bands played there, but mostly to tiny crowds.

Charlie Musselwhite may have still had Harvey Mandel on lead guitar. The Santana Blues Band was still 15 months from their debut album and Woodstock tour de force, but they were a good blues band. Carlos and organist Gregg Rolie were the only band members at this time who would appear at Woodstock.
April 16-18, 1968 The Poppycock, Palo Alto, CA: Petrus
Petrus lived on top of a hill in nearby Half Moon Bay, about 22 miles Northwest of Palo Alto, only a mile or so from the beach and not convenient to anywhere. However, the Poppycock, at 135 University Avenue in downtown Palo Alto, would have been the nearest venue to the band’s hilltop home.  The Poppycock was Palo Alto's leading rock club from 1967 through 1970. Although not a major club, lots of original bands played the Bay Area circuit, playing clubs like The Poppycock in the hopes of getting an opening slot at the Fillmore or the Avalon.


The Palo Alto Times reviewed Petrus on April 17, 1968 (reproduced on Ruthann Friedman's now-incactive website). This itself was rare: the conservative Times generally paid no attention to rock music, and certainly not to the Poppycock. For some reason, the Times reveiwed the Thursday night show at the club.
May 10-11, 1968 The Poppycock, Palo Alto, CA: Petrus
Things must have gone well, as Petrus returned to the Poppycock a few weeks later (they probably played Thursday, May 9, as well).
May 18, 1968 Straight Theater, San Francisco, CA: Allmen Joy/Curley Cooke's Hurdy Gurdy Band/Petrus
May 19, 1968 Straight Theater, San Francisco, CA: Flamin' Groovies/Curley Cooke's Hurdy Gurdy Band/Petrus
Petrus returned to the Straight a few months after their debut. The bands playing the Straight were, if anything, more obscure than before. Allmen Joy was not Duane and Gregg Allman's band (their band was called Hour Glass, and based in Los Angeles). James "Curley" Cooke had been in the first Berkeley version of the Steve Miller Band. The Flamin' Groovies were a local band who preferred British Invasion-style music to the typical SF blues-jamming. 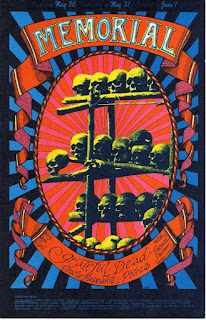 May 31, June 1-2, 1968 Carousel Ballroom, San Francisco, CA: Grateful Dead/Charlie Musselwhite/Petrus (Friday-Sunday)
Jun 2, 1968 The Panhandle, San Francisco, CA: Grateful Dead/Charlie Musselwhite/Petrus (Sunday afternoon free)
Everything to do with the Grateful Dead takes on a much higher profile historically than they usually did at the time. The Dead were infamous, of course, and genuine rock stars by 1968, but they weren't enormously popular. The Dead, Jefferson Airplane and others were trying to run the Carousel Ballroom as a competitor to Bill Graham and Chet Helms, and it was failing dismally. For this weekend at the Carousel, the Dead headlined over Charlie Musselwhite and Petrus for three days. On the last day, the bands played a free concert in the Panhandle.
Among other things, the dates on the poster are wrong, and Petrus' name is mispelled as "Petris."  Like most shows at the Carousel, this was poorly attended, and the venue closed within a few weeks. Bill Graham took it over and renamed it the Fillmore West.

June 7-8, 1968 The Ark, Sausalito, CA: Petrus/Flamin' Groovies
The last glimpse of Petrus was at The Ark, in Sausaliot. A grounded ferryboat, the Charles Van Damme, had been made into a sort of floating restaurant and hangout. Bands would play on Friday and Saturday night, and another band would play a "Breakfast Show" from 2-6am on Sunday morning (this weekend it was the Marin band Transantlantic Railroad).

Petrus drops off the radar after playing The Ark. They probably broke up shortly after. Ruthann Friedman continued to recrdd, and then abruptly retired from the music industry for family reasons around 1973. In 2006, after getting her degree at UCLA and raising a family, re-releases of Constant Companion led to her return to performance. Peter Kaukonen went on to play in Hot Tuna, Black Kangaroo and various solo projects, in a professional music career extending many decades. He was in the initial touring lineup of Jefferson Starship, and later part of the reunified Jefferson Airplane in 1990.
Posted by Corry342 at 3:43 PM