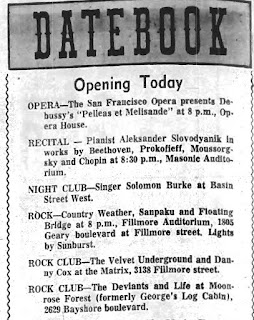 Some mysteries seem bound to remain mysterious, but they are no less fascinating for that. I have been reviewing the Entertainment Section (Datebook) for the San Francisco Chronicle for the latter half of the sixties, and each day it would include a brief listing of performances that were opening that day. This included both performers beginning long runs and one-night stands. Because of the way newspapers were constructed back in the day, the paper required a column of variable length for each edition. The Chronicle made a point to feature major events and regular advertisers, but if space needed to be filled, they stuffed in events that seemed interesting in order to fill the column inches.

The rock venues listed in the 60s Datebook are mostly familiar to me, even if they are now obscure, but my eyes are attuned now to curiosities. In September 1969 occasional mentions occurred for a venue called George's Log Cabin, in a distant part of the City. I paid little attention until I reached the November 14 edition, which promoted the opening of "The Deviants and Life at Moonrose Forest (formerly George's Log Cabin), 2629 Bayshore boulevard." The Deviants were perhaps the London Underground's most notorious band, claiming to be the first band to be introduced on stage as punk-rockers (in July 1967) and spawning a host of nefarious progeny. They did one disastrous North American tour in the Fall of 1969--did they end up on the edge of San Francisco?

A brief glimpse at the openings for that Friday are pretty surprising--the Velvet Underground in the midst of a long, intermittent run at the Matrix, soul legend Solomon Burke at Basin Street West on Broadway, and some obscure legends at the newly re-opened New Old Fillmore on Geary (Crosby, Stills, Nash & Young had opened the night before at Fillmore West and thus did not appear in the Friday list). Yet if the Deviants played, they were unquestionably the rarest sound on tap that night, and that's saying a lot. We may never know the answer--but what can we find out?

The Deviants
The story of The Deviants, also known as The Social Deviants, seems like a work of fiction. Indeed, Deviant lead singer and lyricist Mick Farren is a prolific writer of fiction (and non-fiction), and in some ways The Deviants were like a literary creation, except that they actually existed in the flesh. In the mid-60s, "Deviants" or "Social Deviants" was a scientific term, and not one of praise, so naming a band after a term for troublemaking nonconformists was a threatening proposition. Among many other features, the Deviants were the bad boys in the London Underground scene, friendly with the local Hells Angels and too scary to play the UFO Club (the London counterpart to the Fillmore). I am hardly an expert on Mick Farren, but that hardly matters, since Mick Farren speaks for himself quite eloquently on the story of The Deviants.

By 1969, The Deviants had released three albums, and had a sort of cult following, and they had even made it into the UFO Club. After some personnel changes, the rest of the band (besides lead singer Farren) was guitarist Paul Rudolph, bassist Duncan Sanderson and drummer Russell Hunter. Although no live recordings exist (known to me), the group apparently sounded like Blue Cheer with an agenda, or the MC5 with an accent--loud, angry and on the edge.

The Deviants had set out on a North American tour, which collapsed disastrously when Farren was pushed out of the band in Vancouver. The only known date of the tour (to me) was September 25 through 28 at the Colonial Music Hall in Vancouver, where the band was advertised as "England's Leading Underground Group." Farren has chronicled his own adventures over the years, but the activities of The Deviants in North America after Farren was forced out of the band are unknown. The Deviants apparently continued to tour. Did they wind up in San Francisco six weeks later, to spend at least a week at a venue on the Southern edge of the City, far from the Fillmore West and the Haight Ashbury, and even the Family Dog on The Great Highway? 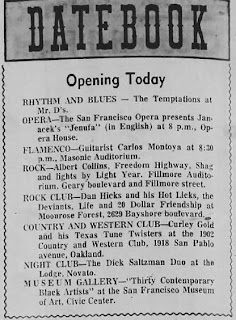 The next week's Friday Datebook (November 21, 1969) lists a new headliner at the Moonrose Forest: Dan Hicks and The Hot Licks, The Deviants, Life and 20 Dollar Friendship are all booked for the weekend. Dan Hicks was an original Charlatan, whose "psychedelic swing" band had moved from a part-time to a full time occupation with the demise of the Charlatans. The engagingly named 20 Dollar Friendship are completely unknown to me.

The remaining Deviants, if indeed they were the English band, were still a formidably crazy bunch. In early 1970, Rudolph, Sanderson and Hunter had returned to London and joined the infamous John "Twink" Adler to form an even more notorious group called The Pink Fairies. The Pink Fairies favored anarchy, drugs and publicity stunts, and their story is too demented to retell here. Suffice to say, the Pink Fairies played key roles in the future of Hawkwind and Motorhead. If the Rudoph/Sanderson/Hunter trio played San Francisco, even hardened Blue Cheer fans would have been surprised at the jolting sounds of the proto-Fairie Deviants. If it was them, what were they doing at Moonrose Forest, and why would anyone put a rock club on Bayshore Boulevard? That leads us to our next mystery.

George's Log Cabin, 2629 Bayshore Boulevard
The Bayshore Highway was constructed in the 1920s and completed in 1937, designed to accommodate the new flow of traffic created by numerous bridges across the bay (The Dumbarton, San Mateo, Bay and Golden Gate Bridges were all completed during this period). The undivided four-lane road ran from Army Street (now Cesar Chavez) in San Francisco down to San Jose. The section in San Francisco's Visitacion Valley was known as "The Bloody Bayshore" due to the numerous accidents. Increasing traffic required changing the Bayshore from a Highway, with crossings and lights, to an uninterrupted Freeway. The first section of the Bayshore Freeway was completed in 1949. Most of the Freeway replaced the old Bayshore Highway, but in 1957 a section of the freeway was built on a landfill causeway from San Francisco Airport to Candlestick Cove, replacing the most dangerous part of the "Bloody Bayshore." This left the old Bayshore Highway to be renamed "Bayshore Boulevard," and what was once a main thoroughfare from the Peninsula to San Francisco became just another neighborhood artery, separated by a lagoon from US 101 and the new baseball stadium at Candlestick Point.

George's Log Cabin appears to have indeed been a log cabin. The Bayshore Highway (now Boulevard) is at the edge of one of the Southernmost San Francisco neighborhoods, Visitacion Valley.  San Francisco is a County as well as a City, and the edge of the City borders San Mateo County. Just before and after Prohibition, Counties had different laws about drinking and gambling. A remarkable artifact from a book on the history of the Visitacion Valley has an old napkin from George's Log Cabin (precise date uncertain)

a patron recalls  that there was a


line painted across the floor of George's Log Cabin on Bayshore. "If you were on the South side of the line on San Mateo County, you could gamble and drink to all hours, but on the North side you'd be in San Francisco, where gambling was illegal and their was a time limit on drinking."

The exact date of these doings at the Log Cabin is unclear. San Mateo County capitalized on being looser than San Francisco, and George's Log Cabin depended on that (Brisbane's Seven Mile House, a a short distance away on 2800 Bayshore, and still open for business, was even more notorious).

According to the book, sometime in the mid-1960s the Log Cabin (visible in the photos on the link) was taken over by a statuary company called Silvestri's. Given the peculiar information I have stumbled on in the Chronicle, the Silvestri's takeover was probably a bit later, in the early 1970s perhaps, or perhaps the Log Cabin briefly mixed day and nighttime uses.

Moonrose Forest
The history of Use Permits in California (and most places) made it so that it was always easier to start a rock venue at a place where music, dancing and refreshments were already approved. Many of the most famous rock establishments, not least the Fillmore and Avalon, had been long time venues for music and dancing. It seems plausible that some entity or other looking to start its own joint found an existing club down on its luck and available cheap, and was able to convert it to a rock music club because no additional approval was required.

My only clue about Moonrose Forest is that there was a Bay Area band called Moonrose Forest, started by bassist Michael Husser. Husser had been in a group called Martha's Laundry, a quite fascinating band for one that never recorded and may not have even been that great (per its own members), but some very interesting people were in that group (including Randall Smith and David Kessner, for those who recognize the names). Moonrose Forest backed Buffy St. Marie for a while,  in late 1968. Did members of the group decide to start their own nightclub? Its an intriguing possibility, and completely unknown, like everything else in this story.

Speculative Conclusions
What do we know for facts?
What can we speculate?
Today

View Larger Map
None of my speculations may be true, or all of them may be. Or somewhere in between. Someone knows--but do they remember?

Update: thanks to Ross's excellent research (in the Comments), we know that the venue was called the Polynesian Hideaway in 1966-67, and as George's Log Cabin it was booking rock bands as early as June 1969. More importantly, we know that the (English) Deviants played The Matrix--a more likely spot for them--in November, so they were definitely in San Francisco, meaning its very likely they were The Deviants who played Moonrose Forest.