(A poster for a Sons Of Champlin/Portland Zoo/Total Eclipse show at Springer's Ballroom, July 4, 1969. h/t Ross for the scan)

Although I know relatively little about Springer's Ballroom, and it only became a rock venue in 1969, it seems like a venue with an intriguing history. Like many 60s and 70s venues, Springer's Ballroom only persists in our consciousness due to the Grateful Dead. For many years, a lively board tape of a January 16, 1970 Springer's show circulated widely in Deadhead  collector's circles, complete with the tantalizing announcement that BB King would play soon after (Friday February 6, 1970) and the Dead would return two days after, on Sunday. Just 35 short years later, the Dead released the Sunday night concert (Jan 18, 1970) as Volume 2 of their Download Series. This post will collect what little information I have been able to piece together about the venue, as well as some interesting observations about its possible significance.

Springer's Ballroom: Location
Speaking generally, most underground 60s rock scenes began in residential areas near downtown that had been deserted by middle class families for the suburbs (that certainly describes the Haight Ashbury). Once rock became big business, however, the audiences for the music was suburban as well, so the main venues were either suburban or easily accessible from the suburbs via public transit or available parking. This meant that funky downtown venues, like the Fillmore or the Crystal Ballroom, were both too small and too inaccessible to the broadening suburban rock audience.  In most cases, the venues of the early 70s were larger Civic Auditoriums and Sports Arenas that had only been used for the likes of The Beatles in the 1960s. In Portland, for example, that meant the Portland Memorial Coliseum, the principal sports and entertainment facility for the region.

What little I know about Springer's Ballroom seems to fit the typical pattern. The initial flowering of the Portland scene, at the Crystal Ballroom, Caffe Espresso and elsewhere was all in the traditional downtown. Springer's, however, was not only about 15 miles East of Dowtown--it wasn't even in Portland. Springer's appears to have actually been in the suburban town of Gresham, OR. I assume that Gresham is one of those towns (like Ballard, WA) that has long been acclimated to being considered part of a larger city next door, but since I know no one from Gresham I can't say that for a fact. All the posters for Springer's Ballroom give directions from downtown Portland--"Powell to 190th, turn right"--which shows the orientation, but in fact Springer's was not in Portland. I doubt that bands such as the Grateful Dead even realized that.

The cityscape of Gresham, OR has changed considerably since the early 1970s, and now you can no longer go on W Powell Blvd and turn right on SE 190th Avenue. It appears that an interchange, a park, and some sort of apartment complex are part of a re-design of the area. In approximate terms, however, the apartment (or condo) at 1124 SW Pleasant View Drive (Gresham OR 97080) appears to be near what must have been the location of Springer's Ballroom. This is only speculation on my part. Anyone who can illuminate this further, whether current or former Greshamites or Google Earth experts (you know who you are), is encouraged to weigh in.


Your location estimate is a bit off... the exact address of Springer's was 18300 SE Richey Rd (Gresham, OR 97080). This is confirmed by some severely outdated search results when you Google the term "springers flea market."

More importantly though, I can confirm the location firsthand. We used to visit the weekend flea market from Portland once every month or so in the 80s. As a kid, I wondered what the building had been previously used for. Definitely a ballroom vibe, with a small elevated platform on one side and a concessions counter in the back as you entered. (The latter was still in use during flea market hours.)

When I lived near Gresham 10 years ago, I was told that the vague directions on many of the posters ("Out Powell to 190th — Turn right") was all that was needed, since there were scattered signs along 190th (now Pleasant View Drive) leading you on to the right turn at Richey.

The building was ultimately razed by a fire in the late-80s. (I could be a tad off on that, but I definitely know it was well before I moved to Gresham in '91.)

Springer's Ballroom: History
This too is a murky subject. A gentleman selling old vacuum tubes on eBay had a lot that came from


a huge old dance hall called Springer's Ballroom in Portland, Oregon. Springer's was famous for some Grateful Dead and Byrds performances in the 60s and 70s. For many many years before that it was a popular venue for big band swing, country and western music. Many famous groups played there

This seems like a plausible story. Some Grateful Dead material suggests that the venue was called "Springer's Inn." It seems plausible that the venue was a riverside resort of some kind, no doubt connected to the Springwater Division Line railroad (also known as The Portland Traction Company), which was essential to the development of communities like Gresham that were directly East of Portland. Powell at 190th was the site of the Linnemann Station (still extant), and the railroad encouraged excursions on weekends. The area was a destination for the first half of the 20th century, but once the automobile replaced the railroads for passenger travel, many travel patterns changed. The Springwater Division stopped passenger service in 1958, and I assume that Springer's Ballroom (and/or Inn) declined with it.

Although the reasons for using Springer's Ballroom may have been one of convenience, in that it was probably a cheap, pleasant old hall without a lot of neighbors who would be bothered by noise, it still parallels the movement of 1960s rock from the City Center to the Suburbs. One intriguing detail of the poster for the January 16, 1970 show is that it says "No Age Limit!" suggesting something restrictive about Portland venues at the time. Since Gresham wasn't in Portland, Portland statutes wouldn't apply, but I don't know if I am reading too much into the statement--perhaps it was just emphasizing that there wasn't a bar.

Springers Ballroom: Owners and Promoters
I do not know the circumstances of the ownership, lease or promotions of Springer's Ballroom. A number of 1969 posters say "Jim Felt Presents." Jim Felt was a regular figure in the Portland concert scene, but I'm not certain if he was some sort of exclusive lessor at Springer's Ballroom, whether he promoted a lot of shows there, or whether he was just one of a number of promoters using the hall. We do know that the Velvet Underground show was promoted by someone who worked for their equipment manufacturer (Sunn), but that show could have been promoted through a sub-lease.

The open historical question is whether there were numerous shows at Springer's in 1969 and beyond, and we only have posters for a few, or whether it was a hall that was only used for somewhat larger touring acts. I am more inclined to believe there were many more shows, if not likely to feature out-of-state headliners, but I can't be sure yet. Jim Felt appears to still be around in Portland, so perhaps there is a lot more to learn. 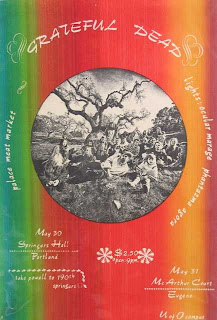 May 30, 1969 Grateful Dead/Palace Meat Market
The earliest record of Springer's comes from a poster advertising two Oregon Grateful Dead concerts: Friday May 30 at Springer's, and the next night at the basketball arena (McArthur Court) at the University of Oregon, about 120 miles South in Eugene. The Palace Meat Market, an Oregon group, appears to have opened both shows.

The poster (above) says "Springer's Hall." At other times, I have seen the venue referred to as Springer's Inn; I take that to mean that the ballroom was associated with a resort hotel, which seems likely. Rather than give a specific address, the poster just gives directions from downtown Portland: "take Powell to 190th, turn right." Powell Boulevard (which is also US Highway 26) is one of the main East-West thoroughfares in Portland, so the simple directions would work. The lack of an actual street address suggests that the venue stood alone, one of the ways I am fairly certain that present-day Gresham has been significantly redeveloped.

A board tape of the show endures. The Grateful Dead always played amazingly well in Oregon.

June 20-21, 1969 Cold Blood/Stoneground
Other dates at Springer's Ballroom are only known through surviving posters. Both Cold Blood and Stoneground were rising Bay Area bands at this time.

July 4, 1969 Sons of Champlin/Portland Zoo/Total Eclipse
The poster (top) calls the venue "Springer's Ballroom." The Sons once again were a popular San Francisco group, in the Northwest to play a festival with the Jefferson Airplane. Portland Zoo and Total Eclipse were popular Portland bands.

July 18, 1969 Youngbloods/Portland Zoo/River/Ron Bruce
The Youngbloods continue the theme of popular Fillmore/Avalon bands headlining Springer's. Its possible that there were only posters for out-of-town headliners, and there may have been considerably more shows, perhaps every weekend. July 18 was a Friday night, so I assume the Youngbloods had another show in the Pacific Northwest Saturday night, but I haven't been able to figure out where.

July 20, 1969 Sweetwater/Portland Zoo/US Cadenza
[update] Thanks to Commenter Bert Paul, who kept the handbill, we know that Sweetwater headlined on this day. Sweetwater was a rising Los Angeles band, who played Woodstock, but soon afterwards was force to go dormant because singer Nancy Nevins was in a car accident.

July 26, 1969 Spirit/Total Eclipse/Gazebo
[update] Known from another handbill kept by Bert Paul. Spirit was a mighty band indeed, although their legend only became cemented after the original configuration of the band broke up in 1971.

November 21, 1969 Velvet Underground/Chapter Five
The Velvet Underground were spending a lot of time on the West Coast during this period. Richie Unterberger's excellent VU chronology White Light/White Heat (Jawbone Books 2009)includes some interesting information, namely that the show was promoted by Don MacLeod, a production manager for Sunn Instruments in Tualatin, OR (VU used Sunn equipment). This suggests, to some extent, that various promoters were using the ballroom. The book reports that about 800 people attended the show.

December 12, 1969 Country Joe and The Fish/Notary Sojac
My assumption is that there were regular shows at Springer's Ballroom, but only some of them featured out of town headliners that justified the expense of a custom poster. I do not yet have any way of confirming my assumption, however--perhaps the venue was only used for more substantial acts. Country Joe and The Fish were an extremely popular band at the time, bigger than contemporaries like the Grateful Dead or the Steve Miller Band.


1970 and beyond
In general I am not pursuing venue research beyond 1969. Nonetheless, I will mention a few high profile dates that I am aware of:


January 16, 1970-Grateful Dead/River
One song ("Easy Wind") was released as a bonus track on the expanded Workingman's Dead cd in 2001. The poster is here.
January 18, 1970-Grateful Dead
The concert was released as Volume Two of the Grateful Dead's Download Series, in 2005.
February 6, 1970-BB King
Known from a stage announcement from the January 16 Dead show
April ?-, 1970 Boz Scaggs
A bootleg tape circulates. This would be one of the earliest Boz Scaggs solo performances in circulation.
July 10, 1971-Brewer and Shipley/Kobolden and Keep
Known from a poster
November 11, 1971-The Byrds/Bill Withers
This show was promoted as "The New Rock And Roll Circus," and was part of a three-date Northwest tour (Springer's, then Seattle, then Gonzaga College in Spokane).
Posted by Corry342 at 5:30 PM