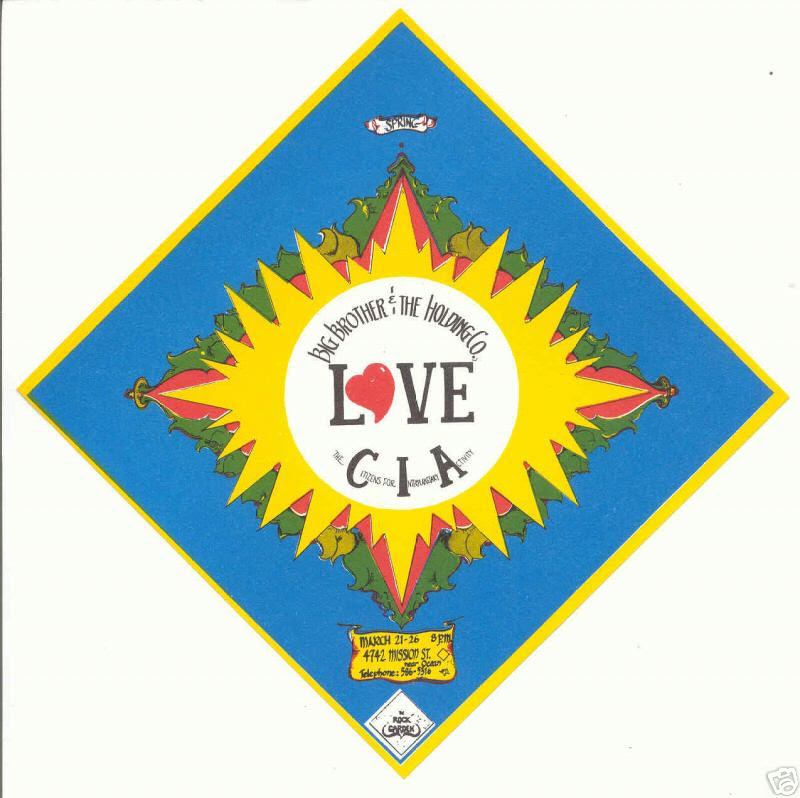 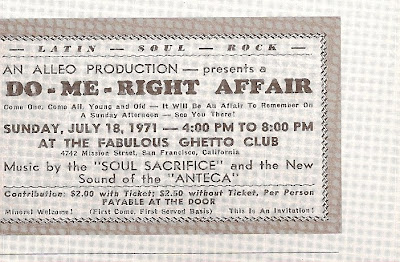 When researching the history of a rock band, or a rock scene, venues come and go. In the 1960s, all sorts of promoters tried starting Fillmore type venues, mostly with limited success. For the researcher or serious fan, these venues seem to appear out of the ether and then return to the netherworld. In many cases, however, the venues remain active over the years, and it is only our interest that retreats. In California, as in most places, the Use Permits for most venues that allow musical performances (and/or liquor sales, dancing, and so on, depending on the Permit) tend to remain in force. Thus a new entrepreneur looking to start a live music club has a much easier time using an already established venue. Many venues go through numerous musical lives, even though fans of one incarnation may be unaware or uninterested in another.

For 60s music historians, The Rock Garden in San Francisco has always seemed like such an ephemeral venue. The Rock Garden, located at 4742 Mission Street, is known for beautiful posters for four week-long engagements in March and April 1967, all featuring the best of California psychedelia. The diamond-shaped poster above advertises Love, Big Brother and The Holding Company and CIA (Center For Interplanetary Activity, a sort of "Performance Art" group) for March 21-26, 1967 (Tuesday thru Sunday). The Grateful Dead and Charles Lloyd played the next week, March 28-April 2 (excepting Thursday March 30). The Buffalo Springfield and Electric Chamber Orkustra were advertised April 11-16. For the week of April 18-23, a poster advertises Country Joe and The Fish. Then the Rock Garden appears to be no more.

What do we know about the concerts in March and April of 1967? The answer--just about nothing. Russ Wilson of the Oakland Tribune wrote a piece about the upcoming Dead/Charles Lloyd show, although it was mostly about Charles Lloyd. In the book The Illustrated Trip, Dennis McNally and Blair Jackson say that Jerry Garcia's mother, who still lived nearby, saw him perform at the Rock Garden. Big Brother and Neil Young scholars acknowledge their respective shows, but I know of no reviews, tapes, photos or eyewitness accounts of any of these shows. As for the Country Joe shows, they were plainly canceled, and some comments in the Berkeley Barb from the band's manager about "alcoholic club managers" seems to point at The Rock Garden.

Who ran the Rock Garden? It remains a mystery. I did read once that Garcia knew the proprietor from his old neighborhood, but that sounds apocryphal. 4742 Mission Street is in the Excelsior District, at the very Southern edge of San Francisco, almost in Daly City. It is a long way from downtown and the Haight. Mission Street turns due South and becomes the El Camino Real, but the Excelsior was a long way from the suburbs too, and in any case the Excelsior had the whiff of being too "ethnic" for many white suburbanite rock fans (as did the Fillmore District). The Rock Garden, whoever backed and ran it, drops out of rock history in April 1967.

Of course, 4742 Mission Street was a building, and a building with a Use Permit for musical performances, so it is no surprise to find out that the club simply changed its name. However, since it changed to a Soul music club, and from there to a Latin (or Latin Soul) club, it dropped off rock historian radar. At the same time, many "ethnic" establishments did not advertise in the mainstream newspapers, so the newspaper research performed by rock historians like me turns up no trace of the club. In fact, however, it turns out that for at least several more years, 4742 Mission Street was The Ghetto Club, and it played an important part in San Francisco music.

I had seen peripheral references before to The Ghetto Club, and gathered that it was a Soul music club. However, I was reading a book called Voices Of Latin Rock, by Jim McCarthy with Ron Santos, about the history of Santana, Malo and Latin Rock music in San Francisco in the 1960s and 70s, and The Ghetto Club plays an important role. I was quite surprised to see an ad for the club in the book,  (reproduced above), only to discover that the address was 4742 Mission Street.

Voices Of Latin Rock (published by Hal Leonard 2004) features remarkable research, with hundreds of unique interviews with musicians and friends who are rarely or never participants in typical rock narratives. The book offers an alternative universe to San Francisco music history, with only intermittent appearances from the usual suspects. The book is focused on personal narratives and musical reminiscence, and it is not focused on a careful timeline of people, venues and events (more's the pity for me). However, it turns out that by 1969 The Ghetto Club was a multi-racial stew of Latin, Soul and Rock, with an apparently diverse crowd, very similar to the Excelsior neighborhood it was located in. A musician named Jose Simon recalls


The Rock Garden was a hard club, real party hardliners. The bouncers were two Samoan guys. They kicked the hell out of anybody trying to kick off in there. The Rock Garden was competition to the Nite Life [another club], and was probably the first rock club in the Mission area [the Excelsior is just South of the Mission District]. They had Big Brother, Janis Joplin, Mongo Santamaria (p.49).


The author ads "Later, the club changed hands and became The Ghetto." Another musician, Richard Bean, chimes in


The Ghetto was originally a black club. Then the Latin thing started there. Abel And The Prophets were like the house band. Crackin was another band from around that time (p49)


Abel And The Prophets were a Latin-Rock-Soul fusion group, probably playing a lot of cover versions, but in their own style. Abel Sanchez was a young guitarist, who would go on to work with Naked Lunch in 1970 and then Malo in 1971, where he was an integral part of that band's sound. In 1969, the other happening club was The Nite Life, apparently at 101 Olmstead Street (near San Bruno Avenue), on the other side of McLaren Park, where a band called The Aliens held court with an amazing mixture of funk, Latin and jamming. The Santana Blues Band evolved into Santana, not least by absorbing Chepito Areas from The Aliens.

None of the amazing alternative history of Latin Rock in San Francisco tells us much about the original founding of The Rock Garden, but it is a telling lesson in thinking broadly rather than narrowly. The current (or at least most recent) business at 4742 Mission Street is El Tapatio Nightclub. I don't live in the Bay Area any more, and in any case I don't stay out late anymore, plus I'm old, so I probably wouldn't want to stay out late and see what's happening there. If history is any guide, however, something is happening, even if I don't know what it is.