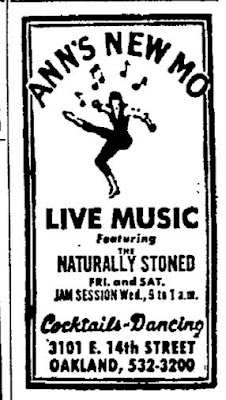 Some mysteries are probably destined to remain mysteries. This ad comes from the Oakland Tribune entertainment section of November 7, 1969. The Trib was Oakland's main paper, and the establishments that advertised in the Friday section were relatively well established destinations. Steakhouses, downtown nightclubs and Nevada Lounges (in Reno and Tahoe) all had regular ads. Certainly some out of town clubs would advertise, but they were larger clubs like Frenchy's, who featured larger acts and appealed to patrons as an evening's destination. For a bar or club, an ad in the Friday Trib was a genuine expense, and some of the smaller clubs only advertised when they had a major attraction.

Ann's New Mo advertised most weeks in 1969, featuring a variety of groups I never heard of. My favorite is this band, The Naturally Stoned. Who were they? What is the semiology of the dancing girl? Is that hip, funky, black, white, what? Who is it supposed to appeal to? Bored businessmen? 20-somethings looking for fun? And what does "Mo" mean? Momentum? Mode? There's a Wednesday jam session, but what do they play? Jazz? Blues?

3101 East 14th Street (now 3101 International Boulevard) is over in the Fruitvale District (near what is now the Fruitvale BART Station at International and Fruitvale Avenue). Presumably the ads were to encourage Trib readers to make the trip down East 14th, but its 4 miles East of downtown, not really on the way to anything. Of course, that's why a club advertises, but the ad seems to be speaking in a language I don't understand.

Its easy to imagine that the coded language is something delicious and exciting, speaking to some kind of musical, ethnic or sexual subculture, but those kind of clubs didn't advertise in the Friday Tribune, since they didn't want squares dropping by unprepared for what they were getting. This ad has to appeal to someone who would read the Friday Trib, looking for things to do and willing to drive a few miles for the experience. "Naturally Stoned" is a clue, sort of, but by 1969 the iconography of drugs was fairly common, and in any case "stoned" still meant "drunk" to a lot of people in the 60s.