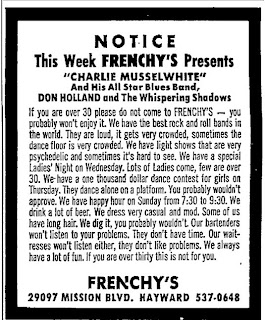 What to make of this ad? Frenchy's was a fairly large club in Hayward that had existed since at least the early 1960s. In 1965-66, it had actually turned into a kind of happening place, if only by an accident of geography--it was the only rock club between San Jose and Berkeley. It must not have been profitable enough, however, as it went "topless" in late 1966. That too wasn't successful (the ads said "Topless Was A Big Bust") and Frenchy's reconfigured itself into a contemporary rock club in 1967. Since it stayed open, it must have done alright. It didn't hurt that there were a lot of good bands in the Bay Area, and that the rock crowd had finally gotten old enough to buy drinks.

By 1969, pretty good bands play Frenchy's. This ad from the November 7, 1969 features a gig (probably  a week-long engagement) by Charlie Musselwhite. Musselwhite had moved from Chicago to San Francisco in 1967, figuring it was better to be one of the best blues bands in San Francisco rather than one of dozens in Chicago. Although his personnel changed, Musselwhite always had a good band backing him, and he was a terrific harmonica player and a solid singer. He played gigs at the Fillmore and all over the Bay Area. The ad is the odd thing here. It says

If you are over 30, please do not come to FRENCHY'S--you probably won't enjoy it. We have the best rock and roll bands in the world. They are loud, it gets very crowded, sometimes the dance floor is very crowded. We have light shows that are very psychedelic, and sometimes its hard to see. We have a special Ladies Night on Wednesday. Lots of Ladies come, few are over 30. We have a one thousand dollar dance contest for girls on Thursday. They dance alone on a platform. You probably wouldn't like it. We have Happy Hour on Sunday from 7:30 to 9:30. We drink a lot of beer. We dress very casual and mod. Some of us have long hair. We dig it, you probably wouldn't. Our bartenders won't listen to your problems. They don't have time. Our waitresses won't listen, either, they don't like problems. We always have a lot of fun. If you are over thirty this is not for you.

Obviously this is one of those ads that is "warning" people not to come and have a good time. Given its location on the Oakland Tribune entertainment page, next to ads for Steak Restaurants, Las Vegas and other expensive entertainment, however, my theory is that the purpose of this ad is to get people over thirty to come to the club. I believe the hidden message is that there are a lot of under-30 women at the club, and middle-aged businessmen who find the Hotels in Jack London Square to be slim pickings would do well at Frenchy's. Whether that's true or not was of course another matter, but I think this litany of cliches only made sense if you were a 30-something square looking for free and easy hippie chicks.
Posted by Corry342 at 6:52 PM