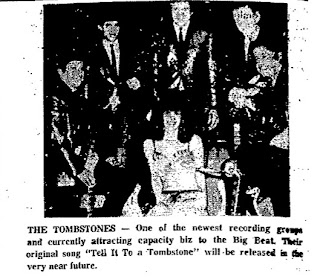 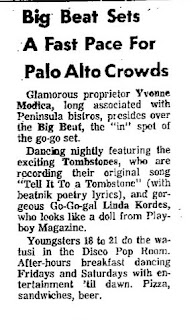 The Tombstones played two South Bay Area clubs throughout much of 1966. One of them was Palo Alto's Big Beat Club, the first rock and roll establishment in Palo Alto--although the venue is more famous for its pre-opening party, an Acid Test featuring The Warlocks--and the other was a club called The Trip, a few miles up the main road in San Mateo.

Both clubs were owned by Yvonne Modica, who had shrewdly determined that there was a market for 20-somethings who liked beer and rock and roll. The tagline for The Trip was "A Journey Through LSD (Lights, Sounds and Delicious Pizza)." Both clubs have largely been lost in the history of Bay Area rock, since they had no direct connection to the underground scene that came to life at The Fillmore and The Avalon. Up until now, I have assumed that The Tombstones were just another dance band, playing several sets a night of danceable cover tunes, and perhaps they were.

However, although I have never heard their single, it is apparently well regarded amongst the knowledgeable. Their song was called "Tell It To A Tombstone, " and the newspaper blurb (from the San Mateo Times of June 24, 1966) breathlessly ads "with beatnik poetry lyrics." Although nothing else is known--by me or anyone else apparently--here is a picture of the group, published in the same edition of the San Mateo Times. They appear to be a nicely-suited 5-piece band. The woman in the bikini must be "gorgeous Go-Go gal Linda Kordes, who looks like a doll from Playboy Magazine."

Although The Tombstones remain obscure, they are now an obscure band with a picture. Research continues, one artifact at a time.
Posted by Corry342 at 10:42 AM