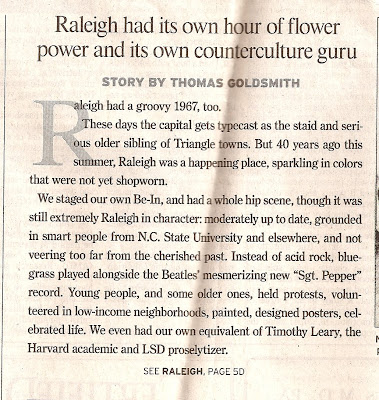 The Summer of Love had a huge impact beyond San Francisco. The effect of seeing the Human Be-In from Golden Gate Park on National televised news, with rock bands, hippies and (in Paul Kantner's words) "acid, incense and balloons" in the height of Winter (it was January 14, 1967) was a clarion call. Many West Coast cities joined the circus immediately, and Be-Ins were held in Los Angeles, Seattle and Vancouver, among other places, and New York as well. As Spring turned into Summer, the major San Francisco bands played free concerts at Be-Ins in places like San Jose and Palo Alto, making the Bay Area seem like a magical destination.

Cities with less forgiving weather, or less available psychedelic accoutrements, were left to made do with what they had. A few years ago the News And Observer, formerly The Raleigh News And Observer, had an interesting Sunday feature on the Summer of Love in the Raleigh/Durham/Chapel Hill "Triangle" events in the Summer of Love. While considerably less memorable than Golden Gate Park, I think they were emblematic of the way that people responded to the Be-Ins, creating their own events based on what flimsy information they had, what with their being no YouTube.

Raleigh, North Carolina is in the center of the State, and it has been the State Capitol since the late 18th century. The smaller city of Durham and the college town of Chapel Hill form the Raleigh Durham Triangle, now best known because of Research Triangle Park, a Silicon Valley like complex between the three communities. All three cities also have major Universities: UNC-Chapel Hill, North Carolina State in Raleigh, and Duke in Durham. In the 1960s, Duke was a sleepy private school awash in Tobacco money but not much else, with indifferent athletic success and an unspectacular student body. Now, with the advent of the New South and RTP, the area is booming and College Basketball mania approaches cult-like fervor, but things were considerably slower then.

Nonetheless, UNC Chapel Hill and NC State were as forward looking as anywhere in the South, although that was a far cry indeed from Berkeley or Columbia. NC State had its own advocate of consciousness, psychology professor Gene Bernard. On April 20, 1967--note the date--Dr. Bernard gave a lecture on hallucinogenic drugs at NC State. Just a week earlier (on April 13, 1967) the state of North Carolina had made LSD illegal. Also on the 20th, a few students at UNC Chapel Hill held their own Be-In, although there seems to be scant record of this.

The Raleigh Be-In, remembered fondly 40 years later by N&O writer Thomas Goldsmith, was held on May 7, 1967 at Reedy Creek State Park. Goldsmith published a lengthy retrospective of the Summer of '67 in the August 5, 2007 News And Observer (excerpted above). About 300 people attended the Raleigh Be-In, and there being no Jefferson Airplane in town, bluegrass music was played. Raleigh had had a proto-psychedelic white blues band, The Heavenly Blues Band, but they had moved to San Francisco in 1966. They were scheduled to open for Jefferson Airplane at the Fillmore on June10-11, 1966, but the guitarist got sick and they missed the gig.

Although the event was quite low-key, for the relatively few proto-hippies in Raleigh, where even long hair was still threatening, it was a hint that the world was about to change. Although it does not sound like there was much drug use (nor many drugs to use) Goldsmith's article does not report any police harassment, so everyone seems to have gone home safe and happy. 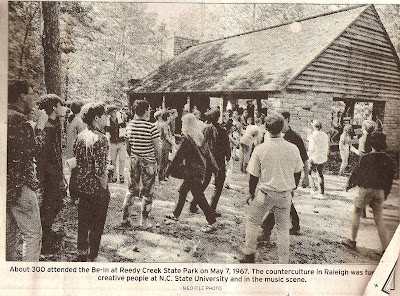 Above is a Raleigh News And Observer file photo from the May 7, 1967 Be-In at Reedy Creek Park (reprinted in the August 5, 2007 News And Observer). Reedy Creek Park, originally founded as a park for Black people in Raleigh, had merged with the (White) Crabtree Creek Recreation Area park to form Umstead State Park in 1966, but for some reason the paper still referred to it as Reedy Creek Park. I find it hard to believe that local readers would miss the association.

Looking at the picture, I can see some untucked shirts and Beatle length haircuts, and the blonde has unpermed hair--Bob Weir or John Cipollina would still stand out, but clearly things are starting to change.