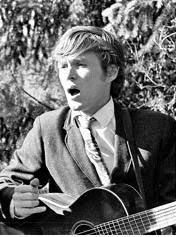 Pat Kilroy was a young folk singer just beginning to make his name on the Bay Area circuit. His story is definitively documented in Issue 25 of Ugly Things by David Biasotti. Kilroy had been spotted at the Cabale in Berkeley by the owner of a property at Polk and California Streets in San Francisco that was being converted in to a “licensed” coffeeshop that would provide live entertainment at the weekends and a home to a cinema group on Mondays. The licensing would allow the sale of beer, but no hard liquor and restrictions would apply. Permits had taken longer to obtain than anticipated, but an opening was scheduled for 4pm on May 8, 1964 and Pat Kilroy was due to play a set at 9pm.

By all accounts, Kilroy arrived at 8:30 to find that the venue had been busted and locked up within an hour of opening for (a) not obtaining a license to sell beer, (b) selling beer to a minor in what was perceived by the owner, but never confirmed, to be a sting.

Kilroy would go on to achieve some local success as a solo artist and with The New Age. He would appear in the movie “The Love Ins” before an early passing at Christmas 1967.

As for the Polk-Gulch Cafetorium, it never re-opened – but I have no doubt that for the one hour it did exist for was an absolute blast. I asked about artifacts and have been told that there were a couple of hand written handbills (something like "Grand Opening with Troubadour Pat Kilroy this Friday") and they were taped to the door and window. It seems unlikely that they will show up now.
Posted by The Yellow Shark at 10:13 AM