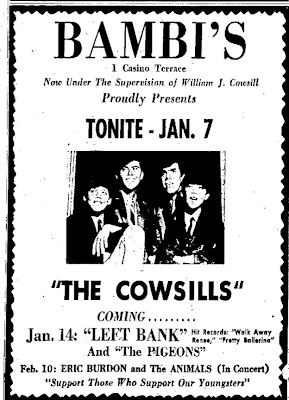 This ad from the Newport (RI) Daily News of January 7, 1967 shows an interesting snapshot of rock in transition. Newport, Rhode Island, besides being the home of many wealthy people (mostly from shipping and insurance fortunes), was also an East Coast resort destination. In the Summer, the famous Newport Folk and Newport Jazz Festivals were must-see destinations for music fans. Like any seacoast resort, things were a little slower in the offseason.

The Cowsills were one of Newport's few musical exports. Initially, around 1965, the four teenage Cowsill brothers simply played Beatles covers on the Newport pier, for tourists. After awhile, they developed a following, and a kind of act, and in 1966 they were spotted by a Tonight Show talent scout, and they appeared on that show. The novelty of talented young teenagers from the same family was appealing as a sort of Everly Brothers/Beatles cross, and the group started to appear regularly on TV.

By early 1967, the group had recorded some singles for Mercury Records, although they hadn't had much success yet. Nonetheless, having appeared on TV and recorded, they were plainly local heroes. The ad says the club is "Now Under The Supervision of William J. Cowsill."At the time, Billy Cowsill was 18 years old. One suspects that his father Bud was keeping an eye on things as well. Later in 1967, The Cowsills would have a substantial hit with "The Rain, The Park And Everything," (MGM) peaking at #2 in October, 1967. By that time, they had added their younger sister Susan to the group, and subsequently their mother Barbara joined the band as well, and they toured the country in a big bus.

Does any of this sound familiar? The Cowsills story was the basis of the sitcom The Partridge Family, an ABC Sitcom from 1970-74 (on Friday Nights, right after The Brady Bunch), but they balked at starring in the show when the network insisted that Shirley Jones had to play the role of the mother, instead of their actual mother. As a result, the Cowsills were replaced by David Cassidy, Danny Bonaduce, Susan Dey, et al. As a great poet once said, "Time will tell/who has fell/and who's been left behind," and the career arc of the Cowsills and the Partridges is roughly comparable: success, derision, nostalgia and respect as time passes.

Whats interesting about this ad is that the pop construct of the Cowsills has the seeds of its own demise embedded in the ad. The Left Bank (really The Left Banke) had a number of hits, and while fine pop concoctions, they were in a similar vein as The Cowsills. Nonetheless, while its impossible to be certain, I believe The Pigeons to be the band that ruled the roost at The Action House in Long Island. The Pigeons were a loud, rocking combo, and they would shortly change their name to Vanilla Fudge. The Fudge, while easy to sniff at now, had a huge influence on other bands, not least the Jeff Beck Group (Beck left his band to play with the Fudge rhythm section), Deep Purple (they hoped to become the "British Vanilla Fudge"), Three Dog Night (who got the idea of rocked up covers of contemporary songs from them) and Led Zeppelin (Jimmy Page liked the thunderous bottom of the Fudge).

The final act listed is Eric Burdon and The Animals, on February 10, 1967, one of the first shows of their American tour. Although fans probably expected the British Invasion style Animals of previous years, this was in fact the new, psychedelic Animals, with Vic Briggs and John Weider on dueling guitars. Their live sound was closer to Quicksilver Messenger Service (if you can imagine Eric leading Quicksilver) than the Dave Clark Five. Even if fans didn't expect that, the noisy blues covers and extended guitar solos would have introduced Newport to the shape of things to come.
Posted by Corry342 at 9:38 PM