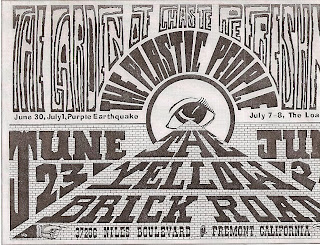 More remarkably, I mentioned that a band called Wakefield Loop had opened for The Loading Zone at this venue. At the time, I only knew that Wakefield Loop was a tiny residential street in Fremont. Remarkably, thanks to the comments from members of The Wakefield Loop, an amazing snapshot of an aspiring band in the East Bay has come to light. The story is best told by Wakefield Loop guitarist Denny Mahdik (from the comment thread)

My name is Denny Mahdik (actually pronounced Magic), and here's the story...

I secured a record deal with Hank Donnig in San Mateo for a band I started called "The Perspectives in Sound". Hank was supposed to have had something to do with producing the hit "You were on my mind" by the We Five... I brought the deal to my bands next rehearsal, and was told by our drummer's parents (John Siebert) that "There would be no record deal as John was going to become a dentist", I protested by threatening to quit the band... and that band showed me the door. We were scheduled to perform at Washington High School the following month, for a Pepsi sponsored "Battle of the Bands". I was upset that the band didn't support me, so I immediately set out to form a new band, one that could deliver the kind of music that was just starting to catch on at that time. We did not have a name, but the new drummer Larry Payne lived on Wakefield Loop in Fremont so that is how we pick that name. We had a good laugh over that and it became the name of the new band. By the way "The Perspectives in Sound" replaced me with Bobby Carter, and my new band "The Wakefield Loop" ended up playing against them and we won the whole event. Later they changed their name to "The Collective Works".

Don DeAugustine became our drummer (funny thing is that Larry Payne actually did become a dentist)
Julio Staben was the Bass Player (now running his own landscaping business)
Dave Simpson was our male singer
Cheryl Williams was our female singer (now a school teacher in Florida)
Dan "Freddy" Garvey played a mean lead guitar
and me... Denny Magic on guitar

We came very close to "making it" but never tipped the scale our way. Yuri Toripov was our manager (him and Paul Cantalana brought the Beatles to S.F.) and at the same time he was managing us... Yuri also managed "The Sopwith Camel", in the summer of 1967 many of us live or stayed with Yuri and his wife in their flat on Fell Street in S.F. Living upstairs was Marty Ballen and Jack Cassidy from the Jefferson Airplane. We played all over S.F. and Marin that year, but never scored a record deal. Meanwhile my childhood friend Cyril Jordan went all the way with his band "The Flaming Groovies"... Now I design Disney-Style rides and attractions for theme parks (see www.dennymagicstudios.com), and on September 12th Cyril came to my home for a BBQ. It was the first time we had seen each other in nearly 49 years. For me, I can now listen to Cyril tell me aboiut all those years of touring, and through him I can be the rock star that I never was. He, he.

Life is really a trip, isn't it?


This isn't just a verbal snapshot, either--lead guitarist Dan Garvey has a remarkable series of snapshots of Wakefield Loop and other Fremont bands in the 1960s. He even includes a great shot of the poster for The Loading Zone and Wakefield Loop at the Yellow Brick Road.

Is blogging great, or what?

update: see here for another post about The Wakefield Loop
Posted by Corry342 at 9:02 AM