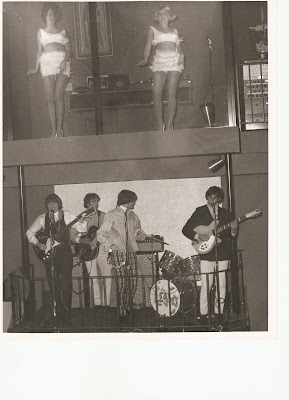 Recently we had been conducting archaeological digs into the little known San Francisco branch of West Hollywood's Whisky A Go Go. At the same time, I had commented in passing about a curious venue in suburban Sunnyvale (between San Jose and Palo Alto) called Wayne Manor. Wayne Manor was rock and soul dance club modeled on a Batman theme, with the club outfitted as the Bat Cave and the waitresses dressed like Bat Girl.

We were startled to receive email from the son of the Wayne Manor operator, the late Joe Lewis. Besides a treasure trove of information on the Wayne Manor itself, which had opened in February 1966. He startled us with the information that the venue had actually opened in Summer 1965 as a Sunnyvale branch of the Whisky A Go Go, offering as proof an amazing photo of the Joel Scott Hill Trio (with Bob Mosley, Johnny Barbata and Joni Lyman) playing the club, right underneath the logo.

The younger Mr. Lewis was also kind enough to send along some other promotional photos, one of which I am publishing here. These photos appear to have been promotional photos taken during or right after the club was opened, probably between July and September 1965. While I think this photo was staged for the cameras, since the real club was much darker, its nonetheless the real band and the real physical setup. I have posted this not only to marvel at it, but to consider a few things about the 1965 rock era:
The Sunnyvale Whisky A Go Go was only open under that name until February 1966, when it became Wayne Manor.