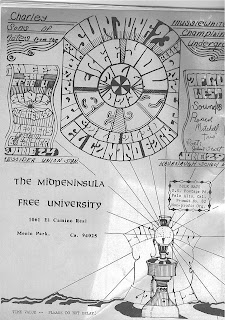 El Camino Park in Palo Alto, bordered by Alma Street, Palo Alto Avenue and El Camino Real, was Palo Alto's first park. Built in 1914, it was just across the street from El Palo Alto, the "tall tree" that gave the city its name, as well as across another street (El Camino Real) from the Stanford Shopping Center that revitalized Palo Alto after the 1950s. The park was also midway between Perry Lane, where Ken Kesey's first parties took place in the early 1960s, and downtown Palo Alto, where various folkies like Jerry Garcia were playing above a pizza parlor. In the Summer of 1967, it was the site on June 24 of a substantial Be-In featuring the Grateful Dead, Big Brother and The Holding Company, The Sons of Champlin and other groups. This event was the culmination of a series of Be-Ins that had taken place from January onwards, in San Francisco, Los Angeles, New York, San Jose and elsewhere.

After the Monterey Pop Festival, however (held on June 16-17-18, 1967), rock concerts started to turn into big business. Many cities grew uneasy about free concerts in public parks, as much for the size of potential crowds as concern about "the hippie element." Cities such as Fremont, which had had a successful event in the Summer of 1967 (the June 18 Banana At Noon event), nonetheless felt uneasy about large groups of long-haired kids congregating in a park to hear loud music. Berkeley, being a lively college town, not surprisingly encouraged the free concerts in the main park (Provo Park at Grove and Allston), but Berkeley prided itself on not being typical. While Palo Alto was a considerably smaller town than Berkeley, it was still a college town, and there was a regular concert scene there too from 1967 onwards, which has been all but forgotten. In particular, the city of Palo Alto regularly allowed free concerts at El Camino Park, with fairly substantial San Francisco bands.

After the June 24, 1967 Be-In, I know for certain of a Fall 1967 concert with the Steve Miller Band and The New Delhi River Band. This June 23, 1968 event with Charley Musselwhite, The Sons of Champlin and Notes From The Underground also stands out for the fact that it was publicized with a mail order flyer. While none of these three bands were major acts, they all were regulars at Bay Area rock clubs and had appeared further down on the bill at places like The Fillmore and The Avalon, so they weren't without appeal. I also know of an August 1968 El Camino Park event (probably August 11) with The Steve Miller Band and Frumious Bandersnatch. The World Historical significance of that pairing was that the Frumious (from lovely Lafayette, CA) met Steve Miller, and 4 of 5 members of the the group ended up in the Steve Miller Band over the next few years (one of them, David Denny, is still in it). There was also evidence of a Sepember 29, 1968 show with Quicksilver Messenger Service and The Youngbloods (and Ace Of Cups/Cold Blood/Freedom Highway/Frumious Bandersnatch/ Flamin Groovies), another Free You event.

While five concerts in the park in two years may not seem like a lot, it was about four more than any city besides San Francisco and Berkeley. While the Sons, Charley Musselwhite and Notes From The Underground were hardly the Dead and Big Brother, they were groups with albums and followings, and none of them were local. Cities like San Jose tolerated free concerts by local groups, but they were very uneasy about substantial events featuring out-of-town bands. Charley Musselwhite, from Chicago but relocated to San Francisco, had a fine album on Vanguard, however, and Marin's Sons had been signed to MGM and then Capitol (although their debut album would not come out until early 1969).  Berkeley's Notes were also on Vanguard.

I only know about this event through the flyer. The MidPeninsula Free University, known colloquially as "Free You" was  an alternative education establishment based at a Menlo Park storefront. Their headquarters was walking distance to El Camino Park (at 100 El Camino Real) as well as to Kepler's Books (and not coincidentally, to Perry Lane). This concert was advertised on the back of a monthly flyer mailed out to interested students, meaning that the show had been scheduled some time in advance. Palo Alto had had a sort of hip bohemian scene from about 1960-66, spawning the Acid Tests, the Grateful Dead and a few other things, but most of the interesting people had moved North to San Francisco or South to the Santa Cruz Mountains by this time. Those who remained, however, while somewhat straighter, were also of the liberal, open-minded persuasion who didn't fear loud music and new things on the Village Green.

El Camino Park events were just a small part of the interesting, if forgotten, rock scene Palo Alto in the 1960s. There was a club called The Poppycock (at 135 University Avenue), and a variety of other intriguing if minor events, including a series of sort of guerilla performances in Downtown Palo Alto itself, at a place called Lytton Plaza. I have been doing research on this history for some time, and I am looking into presenting all of it. In the meantime, however, we can contemplate a sleepy college town, not necessarily hip but tolerant of oddballs, where free concerts in the city park could be organized and promoted with the casual assent of the community.
Posted by Corry342 at 5:58 PM