This post is more about process than substance, but no less interesting for that. Did Quicksilver Messenger Service play an obscure venue on Broadway in San Francisco on the weekend of August 1-2-3, 1969?

The Evidence
Reviewing the entertainment listings in Berkeley's Tribe from August 1, 1969 reveals some surprising listings. The listings for Friday August 1 (above) and Sunday August 3 list the following


(The listing for Saturday, August 2 is the same but excludes Quicksilver. Whatever the status of this listing, I am as inclined to assume that the absence of Quicksilver in Saturday's listing is simply a typo, although that says nothing about whether or not the band actually played)

Quicksilver Messenger Service
In Summer 1969, Quicksilver Messenger Service was San Francisco rock royalty by any standard. Their classic second album Happy Trails had received massive FM airplay, and was a favorite on turntables all over the Bay Area. Gary Duncan had in fact left the group, and it only barely existed, even though they were ostensibly recording an album on Capitol (which would eventually be released as Shady Grove). Although Quicksilver only consisted of John Cipollina, David Freiberg and Greg Elmore, plus any possible guest musicians, they were still a hugely popular group in San Francisco.

Although the band was regularly referred to as "Quicksilver," for obvious reasons, they were never billed that way (just as The Grateful Dead or The Jefferson Airplane were never formally billed as "The Dead" or "The Airplane"). From that point of view, it makes no sense whatsoever that a major San Francisco band that could easily headline a weekend at Fillmore West would be billed for two or three nights at a bar on Broadway, and not listed first to boot.

On the other hand, after several months of complete isolation, Quicksilver Messenger Service had started to play a few gigs. They had played near Monterey (at the Resurrection Theatre in Seaside) on July 18-19, and they played a few gigs in support of the Wild West Festival on August 22 and 23 (Fillmore West and Family Dog, respectively). All the reports suggested a tentative working out of a new lineup, and a low-key gig at a North Beach club is not so far fetched as it might initially seem.

The Venue
345 Broadway was the former site of a North Beach club called Goman's, which I have written about earlier. Initially it was known as Goman's Gay 90s, and it was owned by an old Vaudeville family. The club had mostly presented Vaudeville style reviews, in some sort of modified fashion befitting its name. In early 1967, at least, it did have "Breakfast Shows" from 2-6am, featuring the likes of The Sparrow, but that seems to have been an afterthought. 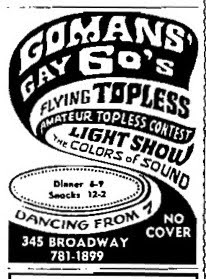 Starting in April, 1967, however, Goman's Gay 90s became Goman's Gay 60s, and featured Topless Dancers, a Light Show and rock bands. Topless clubs provided paying gigs to new bands in town who weren't yet of the status of a Fillmore or Avalon gig (like New Salvation Army Banned or West Coast Natural Gas). While not a great gig, necessarily, club owners were usually tolerant of whatever the band played as long as they kept the beat going, so it was a chance to get started in a new city.

By late 1969, however, the Topless craze had subsided. It wasn't unknown on North Beach, but it wasn't the auotmatic moneymaker it had been. I have to assume that the Goman family gave up on Goman's Gay 60s Topless club, which wasn't their style anyway, and operated a psychedelic nightclub instead. Whether the Goman's actually owned the building, subleased their club or simply let the property owner lease it is unknown to me. It is a fact of city life, however, that Use Permits tend to remain in effect, so a building licensed both to sell liquour and put on musical performances was likely to remain a nightclub.

Did Quicksilver Play Headhunters?--The Parameters
If Quicksilver Messenger Service did play Headhunters Amusement Park, it would have been because they felt they needed the work. The group had experimented with Nick Gravenites as lead singer and rhythm guitarist, and legendary pianist Nicky Hopkins had just joined, but a description of one of the Seaside shows (July 18) showed them to be quite ragged. An eyewitness account of the August 22 Fillmore West show (from diarist Faren Miller) suggests a much more together band, without Gravenites, but with occasional appearances by engineer Dan Healy on guitar and bass (yes, the once and future Dead soundman). Perhaps Quicksilver got it together by playing a few stealth gigs, and Headhunters may have been one of them.Phangangang and Indian Puddin and Pipe, while not well known, were common in Bay Area club listings at the time and would be typical of the groups one might expect to play Broadway.

I have no more information than I have presented here. What I am left with is a list of possible choices, that I have to consider in light of any future evidence (however slender) that may come to light. I am presenting them here so that readers can consider the sparse evidence that Rock Prosopography contends with.

Alternative Explanations
1. There was another group named 'Quicksilver.'
This proposition is a self-evident "no" in 1969 San Francisco. It's like suggesting there was a band called "The Airplane" that was somehow different than Jefferson Airplane. I am dismissing this possibility out of hand.

2. The listing was a mistake, and 'Quicksilver' was a misreading of something else.
This proposition is the most likely. Generally entertainment listings had a deadline (usually something like Tuesday for the Friday edition), and some functionary at a venue made a phone call or sent in a list to various papers. Given that many flyers back in the day were psychedelically lettered and hard to read, some well meaning office clerk could simply have confused some unreadable thing as "Quicksilver" when it was something else entirely.

3. Some stealth Quicksilver gigs were planned, and they got inadvertently publicized.
This is the most intriguing proposition, though the likelihood is still well under 50%. Quicksilver was starting to play around, but didn't even have a stable lineup, and a gig or two at a low-key club would have given the band a chance to try themselves out at low risk. Following the logic here, if they had agreed with the club owner that they might show up, the band's name may have been on some internal log not meant for dissemination, and a well-meaning functionary may have simply phoned in the listing and read off their name, without realizing the implication.

From that point of view, the common shortening of the name to "Quicksilver" makes more sense. Also, the odd configuration of playing Friday (Aug 1) and Sunday (Aug 3) but not Saturday makes an odd kind of sense. The band may have listed nights they might show up, rather than having booked real gigs.

For the third and most interesting proposition, two future pieces of research might be of interest:
My analysis stops here, as I have no further information. In the end, all I can suggest is that Quicksilver Messenger Service may have played a few stealth gigs at a Broadway nightspot on August 1, 2 or 3, 1969. Or not.
Posted by Corry342 at 8:28 PM