Recently I have been focusing my research on rock shows in the Bay Area in the early 1970s, focusing particularly on the lower tiers. With patience, I have done good research on the Matrix, the Keystone Berkeley, the Long Branch and a few other clubs. Yet I consistently come across tantalizing details of other venues, different untold stories and an insight into the unexplained. Without further information, I am often stuck with just the hint, not anything like the actual story. 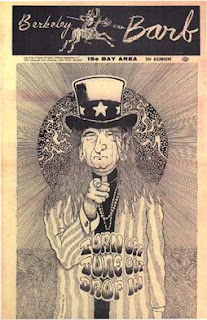 By 1970, the Barb was being read well beyond Berkeley. I don't know the exact details, but I believe that even outside of Berkeley the paper was available in Head Shops, espresso joints and other hip places throughout the Bay Area. At the back of every issue of the Barb was "Scenedrome," a summary of upcoming and ongoing events in the next week that might be of interest to its readers. While that would always include shows at Fillmore West, for example, it also included performers at Telegraph Avenue coffee shops, foreign movies, political meetings, self-help groups and all sorts of other gatherings. Getting listed in Scenedrome any week was free--someone just had to call the Barb by Tuesday at noon. So for hippie events that were on a shoestring, or just free, calling the Scenedrome was the cheapest way to get publicity.

While Berkeley events had always been posted in Scenedrome every week since 1965, by 1970 it was plain that the rest of the Bay Area was paying attention as well. The Friday and Saturday listings in Scenedrome went well beyond Berkeley, a clear indicator that the Barb had a broader readership beyond central Berkeley. So we get tantalizing hints of what was going on around the Bay Area, without really knowing exactly what it was. Most of my notices below come from little more than the barest of listings in the appropriate issue of the Berkeley Barb, with occasional supplements from other sources.

Unlike some lost events, there are plenty of descriptions of the Floating Lotus Magic Opera Company, from inside and from the outside. There's a script of one of the "Operas" (called Walls Of Blood). Around late '68, Floating Lotus even got a good write-up in Rolling Stone magazine. 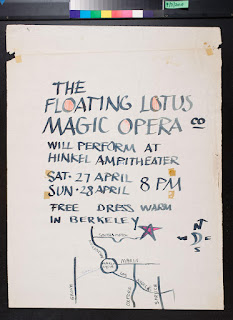 The above listing for January 24, 1970 seems to be just about the last gasp of the Floating Lotus. Founder Daniel Moore had been putting shows on at the Amphitheater in John Hinkel Park since 1968, but I don't know if they were weekly, monthly, seasonal or what. John Hinkel Park is in the lower Berkeley Hills, off Arlington Avenue, near Marin Avenue (and "The Circle," for those who know Berkeley), but not all the way up to Tilden Park (the actual address is 41 Somerset Place).
At least in late 1969, the Opera also performed at the Family Dog on The Great Highway, so they were definitely associating themselves with the hippie rock scene, even if the Opera itself had nothing musically to do with rock. At the very end, they switched to the larger Live Oak Park, further down the hill and closer to campus, at 1301 Shattuck (between Shattuck Avenue and Oxford Street). I learned about the Floating Lotus Magic Opera Company from a regular participant (flautist Susan Graubard, formerly with the group New Age), and I have been trying to figure it out ever since, but I still can't.

I do know that the Floating Lotus Opera Company was not without resonance. Among other things, there were numerous people involved, and costumes and stage sets. I know that around 1970, many of the sets and costumes made their way over to San Francisco and became part of The Cockettes stage show. Now, even I know that the Cockettes were important, but I'm not knowledgeable enough to say how, really, much less whether the Floating Lotus was influential or just a source of stage gear.

I'm really good at some kinds of rabbit holes, like psychedelic rock and roll, minor league baseball or World War 2. But I'm really no good at trans-cultural, reflective performing arts. So I've never gotten a handle on it. Someone has to write a post about it, but it can't be me. But there's a longer, better post here somewhere--I hope someone writes it.