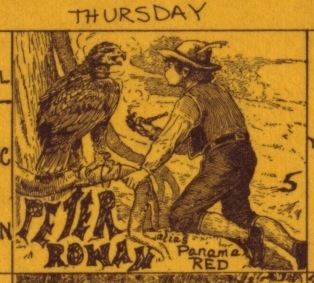 Time, as Steve Miller informs us, keeps on slipping, slipping, slipping into the future. It is thus easy to look back and lose sight of the context of historical artifacts. The specific panel above is from the March 1970 performance calendar for Berkeley's Freight and Salvage club. The Freight opened in July 1968, and despite (or because of) being run by long-haired hippies, it was thoroughly committed to traditional forms of music in all its diversity. Each calendar featured a few dozen miniature panels for each performance (the March 1970 Freight calendar can be seen in its entirety here), and they serve as journals for the psychedelic artwork current at the time, yet they are overlooked because of their tiny size and because "folk" music is not as officially "psychedelic" as rock music from the same period.

Nonetheless, our detailed analysis of the founding of the Freight and Salvage reveals a number of surprising details about rock history. As we have detailed at length in our early history of the Freight and Salvage, the club served a variety of social and musical functions in late '60s Berkeley. One of those functions was to provide an outlet for musicians in rock bands to play the traditional music that had initially inspired them. Many of the rock musicians of the late 60s and early 70s had gotten started in music by playing bluegrass, blues or folk music in folk clubs; Jerry Garcia, Janis Joplin and Jorma Kaukonen were among the most prominent of those in the Bay Area. Yet many other band members around the Bay Area had similar stories.

The group Seatrain was based in Marin County, but its roots were on the East Coast. A few members of the Blues Project (bassist Andy Kulberg and drummer Roy Blumenfield) had moved from East to West, and after completing some contractual obligations (the Blues Project album Planned Obsolescence) formed the group Sea Train. After an initial album, they elided their name to Seatrain, and added East Coast pal Peter Rowan on guitar and vocals, along with the Californian Richard Greene on violin. Greene and Rowan had played together in Bill Monroe's Bluegrass Boys, and Greene had wide experience in various ensembles, including recording with the Gary Burton Quartet (on the 1969 lp Throb). Rowan had been in Earth Opera with David Grisman, who recorded two albums for Elektra, but the band had exploded mid-tour in California in 1969.

By late 1969, Peter Rowan was working with Seatrain in Marin. Rowan, Richard Greene and various other members of Seatrain regularly played acoustic shows at the Freight and Salvage in late 1969 and early 1970 (we have extensively documented the the 1968-69 Freight here). Whether they played "acoustic Seatrain," bluegrass or other original material isn't entirely clear, but the little panel on the March  1970 calendar gives an intriguing clue. The March 5 listing says "Peter Rowan--alias Panama Red." Other listings at the Freight from around that time advertise "Panama Red and Richard Greene," and yet others list Rowan, Greene and other members of Seatrain by name.

Peter Rowan first bubbled out into rock consciousness as the writer of "Panama Red," the title track of the October 1973 New Riders of The Purple Sage album of the same name. Lucky Deadheads in the Bay Area who had seen Rowan play with Jerry Garcia and David Grisman in their bluegrass band Old And In The Way, or heard various local FM broadcasts, knew that Old And In The Way had been doing their version of "Panama Red" as well (both OAITW and the Riders also did Rowan's "Lonesome LA Cowboy"). I have discussed the early, misty origins of Old And In The Way elsewhere, but suffice to say it isn't hard to guess where the New Riders heard the song. The Riders catchy country rock version of the song received regular airplay both on rock stations like KSAN and soon afterwards on the groundbreaking "psychedelic country" station KFAT, out of Gilroy, CA.

"Panama Red" was a perfect mid-70s rock song, catchy and hummable, naughty enough to guarantee no AM airplay, but coded enough to escape the notice of imaginary authority figures (as if High School principals were analyzing rock lyrics). Indeed, as Panama Red itself was replaced by more potent forms of THC, the song itself became a paean to a more carefree era. When the Old And In The Way version was finally released on their 1975 album, the imprimatur of Jerry Garcia assured the song's immortality. Rowan became a popular alternative country rock figure, and new songs like "Free Mexican Airforce" became staples on KFAT. Rowan has had a diverse and successful career ever since, and he continues to tour and record.

It's easy to be nostalgic about Peter Rowan, "Panama Red" and days gone by--I certainly am--but a closer look at the evidence introduces a slightly different twist to the narrative. The Freight and Salvage poster frame celebrating Peter Rowan as Panama Red excerpted above is from March, 1970--a full three years before Old And In The Way and the New Riders started performing the song. Not only had Rowan probably already written the song by 1970, but apparently "Panama Red" was already some sort of performing alter ego for him. "Panama Red" seemed racy and coded enough for 1973, but the song may have been written as early as 1969, when it would have been downright subversive.

Seatrain recorded a number of albums for Capitol, but Peter Rowan had left the group by 1972. I have to assume that Capitol had rejected "Panama Red," or that the band refused to even consider showing it to them. By 1973, Rowan didn't even have a band, so letting the New Riders sing his catchiest song must have been a relief to Rowan, even if he may have been professionally frustrated. Yet it's intriguing to think that the catchiest weed song of 1973, a sort of early Anglo narcocorrido, had been too hot to handle for some years. It's also funny to think that the Freight and Salvage, often chastised back in the day for being too quiet and too serious (people couldn't even smoke!), was the only venue where Rowan's songwriting gems may have revealed themselves, as a true folk tradition in the making.

Although many fine folk artists have played the Freight every month since it's inception (see for yourself), a closer look shows the implicit rock links to the Berkeley folk scene. A few groups who would become Fillmore West and Winterland regulars are already playing there, such as Commander Cody and Joy Of Cooking, and more serious scholars may recognize some connections to the likes of the Diggers and Owsley Stanley. Rowan was a former member of Bill Monroe's Bluegrass Boys, and certainly earned his credentials as a folk musician many years before, but he too was another Freight musician who would make "folk" a part of rock music yet to come.
Posted by Corry342 at 10:42 PM