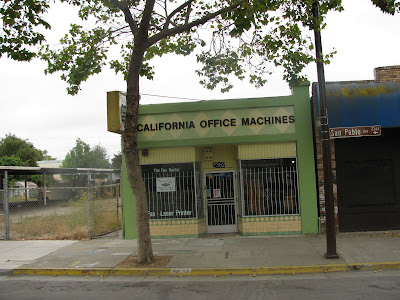 The Blind Lemon was the first folk club in Berkeley, and one of the first on the West Coast. It was founded by Rolf Cahn, a German by way of Cambridge, Massachuessets, who was an accomplished guitarist. The club was opened in 1958, and served coffee and folk music, literally setting the stage for what was to come. Cahn would later found The Cabale Creamery, an important early 1960s Berkeley folk club, a few blocks away at 2504 San Pablo.

This photo was taken on August 11, 2009. The typewriter repair business at the site seems to have closed some time ago. The building is even smaller than it appears in the photo, a narrow building that is not particularly long.
Posted by Corry342 at 12:38 PM