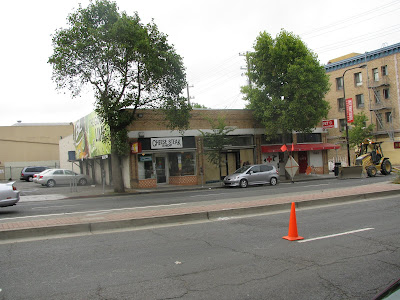 1048 University Avenue in Berkeley (between 10th Street and San Pablo Avenue) was the site of Mandrake's. From 1965 onwards, Mandrake's was a pool hall that booked occasional music shows, often for free. By mid-1968, the venue was taken over and booked by Mary Moore, the wife of a jazz musician (Willie Moore).

From 1968 to 1974, Mandrake's was an important club on the Berkeley music scene. The Joy of Cooking had a regular weeknight gig there for much of 1969, and it helped to establish both the band and the venue. Weekly bookings at Mandrake's ran the usual spectrum of American music, but there was a little more emphasis on blues and jazz than competing clubs like The Longbranch (on 2504 San Pablo) and the New Orleans House (on 1505 San Pablo).

After Mandrake's closed around 1974, the venue reopened as Jerry's Stop Sign. The one time I went there in 1977, there were pool tables, so it appeared that the venue had returned to its earlier incarnation. I was seeing a friend's band play, but no one was there. The bartender politely suggested that the previous night's shooting may have cut down on attendance.

I took the photo above on August 11, 2009. The site is currently a pet emergency hospital. The angle is poor because of roadwork at the time, but 1048 University is the right half of the structure, with the orange awning. I no longer recall if the other half (1054) was part of the original venue, but I doubt it.

Barbara Flaska
When I originally published this post, I was trying to memorialize the location of a long-gone Berkeley venue. Befitting a blog with the name "Rock Archaeology," my best case scenario was a few Comments that would provide the equivalent of a potsherd or spearpoint, a tiny hint at the rock and roll life of Berkeley in the 60s. Who could hope for more?

All this changed a few Comments down on the thread, when Barbara Flaska joined in. Barbara had been an employee of Mandrake's starting in 1969. She stayed there for the next two years, and stayed in touch with the club and its staff for the next several years. Barbara was not just an employee, but a huge fan of the music and the ambiance, blessed with a warm spirit, an excellent memory and a determination to get history right. Her huge contributions to this post, embedded in the gigantic 500-Comment thread, show the world of Mandrake's from 1969 to 1971 in a rich light. Barbara got numerous participants from back in the day to contribute directly and indirectly, and as a result this post is far and away the richest vein of Rock Archaeology on the entire blog.

Rock Archaeology always hopes for a glimpse of a rock and roll past, discernible perhaps from a few remaining artifacts. Thanks to Barbara Flaska, we have not just a glimpse but a detailed portrait of an entire lost world, with its dark and light portions equally available. Long gone characters come to life, lesser known musicians like Freddie Roulette are a regular part of the landscape, and major stars like the Rolling Stones wander through as well, all part of the intricate fabric of Mandrake's in Berkeley, back in the day.

Here's to Barbara--thanks for making Mandrake's come to life, a gift for everyone who reads this.
Posted by Corry342 at 11:20 AM