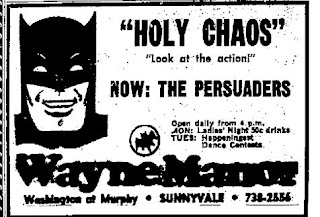 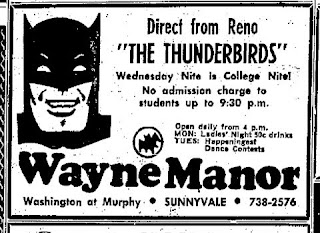 How popular was ABC-TV's Batman show? While it only ran for two and a half seasons (Jan 12, 1966 to March 14, 1968), it was on twice a week for most of its run. It rapidly went from hip to camp to passe. When it was popular, however, it was a huge hit, in an era when there were only three TV channels, so its appeal cut a wide swath.

By the middle of 1966, there was a club in Sunnyvale called Wayne Manor, designed to look like the "Bat Cave" from the TV show. Mind you, this club sold drinks and was intended for adults. It was successful enough to stay open at least into the middle of 1967. I don't know exactly when the club closed, but the Batman show ended in early 1968, so I'm sure the club had closed or changed its name by then.

The top ad is from the July 22, 1966 edition of the San Mateo Times, and the lower one is from the October 21, 1966 San Mateo Times. Sunnyvale is the town just South of Mountain View, which in turn is just South of Palo Alto. Washington and Murphy is roughly between El Camino Real and Central Expressway (Alma), next to Los Altos Town Center and the train station (now the Cal Train station). Since there isn't a precise address, I can't say if the building is still standing.

Sometimes you will see 60s South Bay musicians refer to this club, although they usually call it "The Bat Cave." According to the San Mateo Times (October 21, 1966), the owner or manager of the club was named Joe Lewis. I believe Emilio Castilio's first band, The Gotham City Crimefighters, were regularly featured here, before he formed The Motowns, who then evolved into Tower of Power. In the various ads I have seen for the club, the only group I have heard of is The Music Machine, who were scheduled to play on October 25, 1966 (they were mentioned in a notice, but not in the weekly advertisement above).
Posted by Corry342 at 10:27 AM