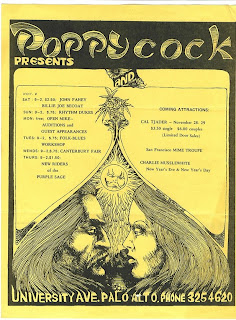 Palo Alto had a thriving bohemian scene in the early 1960s, spawning both Ken Kesey's acid tests and The Grateful Dead, among other things. However, the tiny scene centered around Dowtown Palo Alto and nearby Menlo Park (where Kepler's Books was located) rapidly scattered to San Francisco and Santa Cruz when things got interesting. Palo Alto was a college town, liberal and progressive, but oddly sleepy--one San Francisco columnist (a former resident) accurately called it "a hotbed of social rest," which it remains today. By the late 1960s, Palo Alto was in a funny niche--a town whose residents were tolerant of long hair, funny smelling smoke and new ideas, but not particularly interested in exploring it themselves.

The net result was that Palo Alto had a thriving if small concert scene in the late 1960s, which hardly bothered the tolerant residents, but at the same time not large enough to develop any traction on its own. The town of Palo Alto had a very odd history, the essence of which was that railroad mogul Leland Stanford founded the town on the basis of being anti-liquor, in contrast to sinful Mayfield just a few miles away (California Avenue to any locals from this century). Although the history of alcohol and Palo Alto had undergone some twists and turns, by the mid-1960s you could buy beer at a restaurant Downtown, but there were still no bars. Thus any local beer joints had a surprisingly important status in Downtown Palo Alto, since a frosty Budweiser was the closest thing you could get to a drink.

I have written previously of the epic 1967 Palo Alto Be-In and the surprising series of free outdoor concerts that followed. Along with a willingness to allow the local hippies to put on free concerts in the city park nearest downtown (El Camino Park), Palo Alto also had its very own rock club, The Poppycock, a peculiar little venue all but forgotten by everyone except Ross and me. It was located near the train station, on University Avenue and High Street--could you make this up?--and next door to the pizza parlor where Jerry Garcia and other folkies had honed their chops to tiny audiences in the early 1960s. The building is still intact: here is a 2006 photo, and while it has been remodeled it gives a sense of the modest scale of the structure. 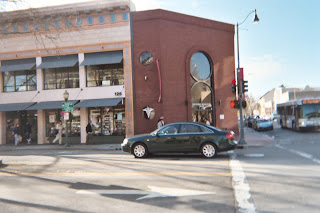 (for former or current Palo Altans, the building is at 135 University at High Street. The Tangent (and The Top Of The Tangent) was next door at 117 University. At the time of this photo, it was a branch of Stanford University Bookstore, who has since vacated, but the building is still for lease last I checked. The building has been substantially remodeled since its Poppycock days).

Downtown Palo Alto had kind of died in the mid-1950s, thanks to the opening of the nearby Stanford Shopping Center. The moribund real estate market allowed some hippie types to buy the three story 135 University building in about 1967. While offices were rented upstairs, the owners (whose names remain inaccessible to me) opened a Fish "N' Chips take out shop on the ground floor, with a beer joint/night club, complete with light show providing nightly entertainment. A couple of historic facts stand out about The Poppycock at this time
In 1967 The Poppycock was sort of like a lounge, as near as I can tell, with regular entertainment but not "names" (a local jazz trio did play there regularly, featuring Woodside High School student Mike Shrieve on drums). By 1968, however, the club had switched to a more rock-oriented format, albeit with some folk and Theater mixed in. The Bay Area was the place to be for rising rock bands, and a circuit was developing for working bands, that included The Matrix in San Francisco, The New Orleans House in Berkeley and The Poppycock. Bands on the road could "tour" the Bay Area, in between more high profile gigs opening at The Fillmore and The Avalon. At the same time, local bands had a place to build their audiences.

The audience of The Poppycock was slightly at odds with the town. The hippest people in Palo Alto were the local High School students, but of course they couldn't get into a bar, and were "forced" to go the Fillmore or whatever other concerts were nearby. Conversely, long-haired 20 somethings from Santa Clara to San Mateo had few choices for nighttime entertainment, since while there were plenty of bars in the South Bay, they didn't always play original rock music nor were they necessarily sympathetic to hippies. While a hippie in the South Bay was rarely subject to physical violence (it being a hotbed of social rest, after all), the point of going out was to meet like minded people, preferably of the opposite gender, and for hippies in the South Bay that meant The Poppyock.

As a result, the hip Palo Alto residents couldn't get into The Poppycock because they were minors. Most young working people didn't live in Palo Alto, however, because it was too dull and expensive, but paradoxically for those who lived in in the nearby counties the Poppycock was a destination, particularly on weekends, because the cheaper suburban towns weren't tolerant enough of longhair hippie establishments.

November 8, 1969 Poppycock Calendar.
Ross found this poster somewhere, I don't know where, but in any case only he and I would care. Its actually a pretty good snapshot of the kind of acts who played The Poppycock.

Saturday, November 8, 1969   John Fahey/Billy Joe Becoat
John Fahey was Berkeley's legendary pioneer of acoustic guitar, a huge influence on both Country Joe and The Fish and Leo Kottke. If that makes sense to you, you'd like John Fahey. Billy Joe Becoat apparently recorded an album for Fantasy this year, but I know nothing else about him.

Sunday, November 9, 1969 The Rhythm Dukes
The Rhythm Dukes at this time featured former Moby Grape members Jerry Miller and Don Stevenson, along with bassist John Barrett and drummer John Oxendine, both formerly of the group Boogie. Stevenson had played drums in Moby Grape, but he switched to guitar for this group. This promising group lived in Boulder Creek in the Santa Cruz Mountains, and were a good example of the type of band that played The Poppycock because there were few other South Bay outlets for original music.

Monday, November 10, 1969 Open Mike-Auditions
Tuesday, November 11, 1969 Folk-Blues Workshop
The Poppycock was professionally connected to The Top Of The Tangent, next door, although it may have been called The Trip Room by then. The Folk Blues Workshop was a kind of "Best Of The Hoots" ensemble that played different clubs around the Bay Area. The best known graduate of this process was folksinger Jim Page (no, not him), now based out of Washington State.

Wednesday, November 12, 1969 Canterbury Fair
Although I know nothing of Canterbury Fair, they were a familiar name on Bay Area rock venues at small clubs during this period.

Thursday, November 13, 1969 New Riders Of The Purple Sage
At this time, Jerry Garcia had recently helped establish The New Riders Of The Purple Sage as a vehicle for him to play pedal steel guitar. Old Los Altos pal John Dawson wrote and sang the songs, and David Nelson provided the electric guitar licks, Buck Owens style. Phil Lesh played bass and Mickey Hart played drums. During this period, the New Riders played a lot of Bay Area clubs on weeknights, as long as the Dead were not on tour.

The Grateful Dead had formed in Palo Alto, as The Warlocks, but to my knowledge they never had a paying gig in the town. They played The Big Beat Acid Test (in South Palo Alto, at 998 San Antonio Road), and they had even auditioned at Palo Alto's first folk club, St. Michael's Alley, at 436 Hamilton (they flunked). But there were no gigs in Palo Alto for long hair bands, to my knowledge, and they had to start playing various clubs in the South Bay along the El Camino Real Strip, which ultimately led them to San Francisco.

The Grateful Dead had played the Palo Alto Be-In on June 24, 1967, but of course that was a free concert. I believe the November 14, 1969 Poppycock gig to be the first time Jerry Garcia got paid for a show in downtown Palo Alto since the days of Mother McRee's Uptown Jug Band Champions in 1965.

It very well may be that the New Riders appeared again the next Thursday--the band definitely were scheduled for Thursday November 20, and the poster seems to imply multiple Thursdays.

Jazz musician Cal Tjader, a critical figure in Latin jazz, was actually born in the South Bay and of Swedish extraction. As such, he was a popular local figure, independent of local rock currents.

The San Francisco Mime Troupe had been a popular counterculture attraction for some years. The Poppycock had a fair amount of theater events, particularly on weeknights.

Charlie Musselwhite had taken a month's leave from his job in a Chicago steel mill in 1967, and he stayed for over 30 years. It is possible that his band already featured Ukiah guitarist Robben Ford.

We are working on a complete Poppycock venue history, but it remains in progress. Anyone with insights, corrections or recovered memories (real or imagined) please Comment or eMail.
Posted by Corry342 at 4:04 PM