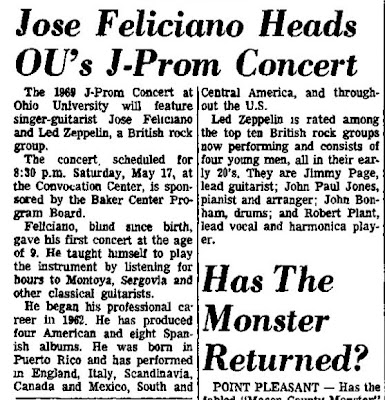 This event is well documented in the history of Led Zeppelin, but its still striking to come across the article. In the 1960s, most American colleges and Universities had substantial budgets for student entertainment, and major entertainers performed regularly. Outside of the two coasts, many schools still had "Prom" dances, just like High School. Ohio University in Athens, OH is a major public University, so their Junior Class dance would have been a fairly large event. The headline in the April 29, 1969 edition of the local Athens Messenger says "Jose Feliciano Heads OU's J-Prom Concert." The first paragraph cheerily begins


Jose Feliciano was a popular artist, in what today would be called a "crossover" style. He was popular in Las Vegas type places, but he also had some radio hits, including a sort of Brazilian version of The Doors "Light My Fire." He would have appealed to a broad swath of the Midwestern student body, talented enough for the hipsters, but catchy enough for everyone else.

This show was probably booked in March or so, if not earlier, and Led Zeppelin's first album was only released in January 1969. The thinking of the booking agent was probably to have an enjoyable artist for everyone, supported by someone a bit louder for the hip kids. Led Zeppelin was booked as an opening act on most dates of their first American tour from December 68 through May 69, and this was no exception. There were various English bands touring around America at the time, trying to build an audience: Ten Years After, Family, The Nice, John Mayall, Savoy Brown and so on. Some made it, and some didn't.

None of them were Led Zeppelin however. Its well worth a read of the concert memories on the Zep concert site. By May, everyone had memorized the first Zeppelin album, and they charged the stage while Zeppelin showed everyone that the first album was just a taste of the metal madness that awaited. They blew everyone's brains out, and much of the crowd simply split, leaving Jose Feliciano to play to a half-empty hall.

I've got to think 1970's Junior Prom Concert was kind of a letdown.

(oh yes: Has The Monster Returned? refers to the so-called Mason County Monster, supposedly a giant bird that ate pets. Its not a Led Zeppelin reference, but perhaps it ought to be)
Posted by Corry342 at 3:29 PM