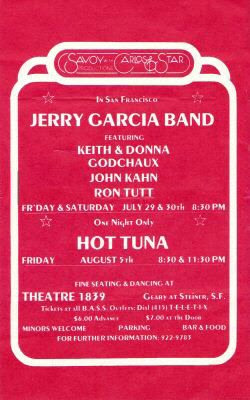 Most scholarly Deadheads are aware that the Jerry Garcia Band played two shows at Theatre 1839 in San Francisco on July 29 and 30, 1977, not least because a fine double-cd set was released from those shows. I attended the second show on July 30, and it was a truly wonderful performance in an inspiring venue. I was sorry that Jerry never played there again. It was only later when I found out some of the interesting historical aspects of the building, and I thought I would pass those on.

There were three significant buildings on the South (odd numbered) 1800 block of Geary Boulevard. The most famous to rock fans is of course the Fillmore Auditorium at 1805 Geary, on the corner of Fillmore and Geary, built in 1912 (as The Majestic Hall and Dancing Academy) and still operating today. Next door was the former site of the synagogue for Temple Beth Israel, an early Jewish congregation in San Francisco, founded around 1860, which began constructing its fifth building at 1839 Geary in 1905, although its completion was interrupted by the April 1906 earthquake .  Next to the synagogue was the Scottish Rites (Masonic) Temple Building, known as the Alfred Pike Memorial Temple, at 1859 Geary, which dated back to the 19th century. A remarkable photo exists from right after the 1906 San Francisco  earthquake, showing a damaged Beth Israel synagogue and the equally damaged Masonic Temple, with an empty lot where the future Fillmore would be built a few years later. Although there were a number of different addresses on the block, these three buildings were the main structures on the block until the 1980s.

I have written an extensive post about The Geary Temple (1859 Geary) elsewhere, but 1839 Geary deserves some attention of its own.  A striking photograph from 1964 of Temple Beth Israel can be seen at the San Francisco Public Library site. The edge of the Fillmore Auditorium is visible just to the left (East) of the building. It is a striking and beautiful building, which in 1964 would have been 58 years old (it was completed in 1906, after the earthquake). In 1964 the Fillmore Auditorium, after some time as a roller skating rink, had become an important venue for African-American music, promoted by Charles Sullivan, who was one of the principal promoters of black music on the West Coast.


When Charles Sullivan retired at the end of 1965, after renting the facility a few times, Bill Graham took over the lease of the Fillmore Auditorium, starting on February 1, 1966. The venue was an immediate success, but Graham was not without troubles. In particular, he had particular difficulty with the status of his "Dance Hall Permit," a left over bit of bureaucracy from the post-Prohibition era. While initially Graham had used Sullivan's license, he had considerable trouble procuring a license from the City of San Francisco, and at one point was even arrested. This made Graham particularly susceptible to challenges from the community.


Apparently the rabbi at Temple Beth Israel was not a fan of Graham's use of the Fillmore (whether he appreciated Sullivan's promotions is unknown). Graham took a bitter relish in relaying the story of how the rabbi accused him of not knowing the suffering of the Jews, in response to which Graham pulled up his sleeve and showed the rabbi the number the Nazis had tattooed on his arm as a child (I heard Graham tell this story in person at a lecture in 1976, and he was still angry at the rabbi). Twice in 1966, Graham moved events at the Fillmore to other venues to accommodate Jewish religious celebrations: on April 16, 1966 the Jefferson Airplane/Butterfield Blues Band show was moved from the Fillmore to Harmon Gym at UC Berkeley, and on September 10, 1966 the Mothers Of Invention/Oxford Circle show was moved to the Scottish Rites Temple across town (at 2850 19th Avenue and Sloat Blvd).


Graham eventually received a Dance Hall Permit, and apparently by 1967 conflicts with the neighboring Synagogue were no longer an issue. Whether Graham was no longer concerned with political pressure, whether he moved key dates to Winterland or there was some other solution is not clear to me (I have not been able to determine which would have been the relevant dates in 1967). In any case, Graham was so successful he looked to move out of the Fillmore to the Fillmore West, and by mid-summer 1968 Graham had moved to Market and Van Ness.


Temple Beth Israel was on the move as well, as its Congregation merged with another Congregation, becoming Congregation Beth Israel-Judea in 1969. The Congregation moved to 625 Brotherhood Way in San Francisco, where it remains today. The Temple at 1839 Geary seems to have been temporarily used for other functions and then sold around 1971, as near as I can tell. The building's history from 1971 to 1977 is obscure to me.


Theatre 1839
Ads for the shows above abruptly appeared in 1977. The promoters were unknown to me. Older folks must have recognized the building, but all I knew at the time was that it was near Winterland (at Post and Steiner), then the principal rock and roll concert venue in the Bay Area. I knew the Fillmore Auditorium had been somewhere around there, but when we went to see Jerry Garcia (hi Geoff) at Theatre 1839, we had no idea that the fully intact Fillmore was right next door. Although the venue had "festival seating" for the most part, probably different than its synagogue functions, the elegant ceilings and decorations were intact, and it was not only a beautiful building but beautiful sounding as well.


The Garcia Band show on July 30, 1977 was fantastic, and when I later acquired tapes of that night and the night before I learned that I had not imagined it. The Hot Tuna show on August 5 was used for the 1978 Hot Tuna live album Double Dose, so all the shows at Theatre 1839 were turned into live albums. I talked to someone who went to the Hot Tuna show, and he confirmed my feeling that it was a wonderful venue.Whatever the finances behind the Theatre, however, it was not used for another show in that incarnation, and more's the pity for that.

Right next door, however, was the converted Alfred Pike Memorial Scottish Rites Temple, which by this time was the headquarters of Jim Jones's infamous Peoples Temple. Jones and his followers left for Jonestown, Guyana and their tragic mass suicide took place on November 18, 1978. While Theatre 1839 was not directly connected to those events, it did add to the strange mojo of the block.


Temple Beautiful
Theatre 1839 did arise as a performance venue, however, known as Temple Beautiful in early 1979 and hosting a number of punk rock shows. The Clash in particular played a warmly remembered gig there, as well as many more local bands. While this is outside the scope of this blog, it is worth noting that once a Use Permit has been defined, venues are more likely to remain in use. Once again, I do not know the finances behind the concerts, nor why the building stopped being used for music after about 1980. At some point the building became "The Duquette Pavilion," hosting the work of artist Anthony Duquette.

The Loma Prieta earthquake of 1989 damaged the Fillmore Auditorium, Temple Beautiful (1839) and the former People's Temple (1859), and all the buildings were damaged by fire. The Fillmore was fully refurbished, but the two other buildings were torn down. After some time as vacant lots, the 1859 Geary address is now a newly constructed Post Office, and I do not know the fate of the lot at 1839.