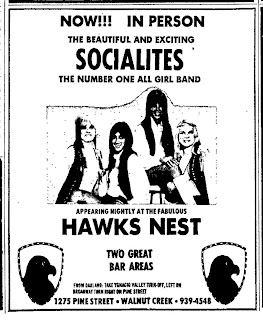 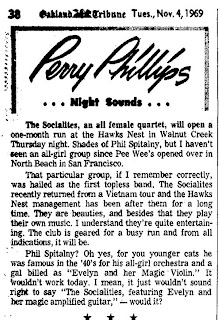 I know nothing about this group or this venue beyond what I have presented here, but it doesput the strange universe of 1969 into stark contrast. Since the late 1970s, rock and its offshoots have dominated the music industry, as the rock generation began having kids of their own, and rock and its musical values became mainstream. Even by 1969, however, rock was far from dominant except among people under a certain age, and who lived in big cities or college towns. It is easy now to mock the stoned seriousness of hippie groups who insisted on playing their own songs--not always good ones--while dressed in baggy jeans. However, a glance at the Oakland Tribune entertainment section for November 1969 shows what passed for entertainment. The ad on the top is from the Friday, November 7 1969 Trib, promoting nightly performances by "The Beautiful And Exciting Socialites," who were apparently "The Number One All Girl Band." A promotional description in the Entertainment column a few days earlier (Tuesday November 4) tells the story:


The Socialites, an all female quartet, will open a one month run at The Hawks Nest in Walnut Creek Thursday night. Shades of Phil Spittany, but I haven't seen an all-girl group since Pee Wee's opened over in North Beach in San Francisco.
That particular group, if I remember correctly, was hailed as the first topless band. The Socialites recently returned from a Vietnam tour and the Hawks Nest management has been after them for some time. They are beauties, and besides that they play their own music. I understand they're quite entertaining. The club is geared for a busy run and from all indications it will be.

So, to review:
What drove The Socialites? Obviously, they were musicians who wanted to make music for a living instead of work in an office, and in any case there were a lot fewer professional options for women at the time. I have ruminated before on the strange, rarely recalled history of touring Vietnam and Asia in the 60s, and it must have been doubly weird for women. Still, they were almost certainly playing cover songs in matching outfits in places where their job was to provide background music for dancing and drinking, and any artistry had to just be on private display for the occasional musicians in the crowd. Better than being a secretary or working in a Cannery, but does anyone recall them? They don't seem to have made a record, nor can I find another whiff of them (although their name is singularly difficult to google).

Compare The Socialites to the Bay Area's own all-female psychedelic band, The Ace Of Cups. For various reasons the band never made an album, and was never a headline act, but they played music they wrote, and they remained underground legends to this day. Ultimately their old tapes were made into an excellent album, and their website message board attests to the impact they had. That's not to say that The Socialites had any desire to be The Ace Of Cups, but its important to remember that the rock music scene in the 1960s was only a small slice of the musical dollar.

The site of The Hawks Nest (1275 Pine Street in Walnut Creek) is now an Enterprise Rent-A-Car. The fate of The Socialites remains unknown.

Update: I still know nothing about The Hawk's Nest, but quite the opposite is the case with respect to The Socialites. I was fortunate enough to be contacted by Socialites keyboard player Sandy Towers, who gave me the whole story (she is on the far left in the above picture). It's quite a fascinating story, so I'm posting her history in its entirety (note the link to Michigan's contribution to "all-girl" bands, The Debutantes). Sandy Towers:


The Socialites was a top-40 band, with quite a show.  Char Velasquez, a phenomenal bass player, was quite wild and uninhibited in expressing her instrument, and many times her sister, Toni Velasquez, the lead guitar player would dance in unison with Char.  Both girls would kick their legs up and throw up their instruments in unison, quite a show to see.  Their father had his own band, back in Kalamazoo, Michigan, and he encouraged the girls to start their own group.  I think they started their group at quite a young age, with a local gal, Nancy Rogers, playing drums and another girl, Nancy Anglum,  playing keyboards.  At some point the girls lost the drummer and hired a drummer from Detroit named Jino Chominski who had been playing with "The Debutantes," a very successful Detroit group.  The keyboard player also left the group.  The group had been on the road and had been doing tours in Southeast Asia.  Their manager came to Indianapolis to offer me a job with them playing in Hawaii.  I was playing with a group called the Pastels and the group was going to be breaking up. I accepted the gig in Hawaii without even meeting the players.  Soon I was on a plane, 18 years old, flying to Hawaii to meet three girls who were complete strangers.  The money was much better playing in an all-girl band as it was quite a novelty.

The material we played was danceable, party music as well as ballads with lots of three part harmony. There were some showstoppers:  both Char and I played horns while playing our instruments.  Char played trombone and bass at the same time and I played trumpet and my Hammond B3 and electric piano.  I had studied classical piano from the age of 4 and had the ability early on to hear a song and be able to play it.  I was an educated musician and was "instrumental" in helping to give the girls their vocal parts as well as the chord changes.  Our harmonies were very strong and we rehearsed constantly--we did take our music seriously.  For me, music was the only thing I ever thought about at a very young age.  We consistently toured across the US, played many gigs on the West Coast, in the Midwest and in Michigan.
Jino left the group shortly after we left Hawaii and we ended up picking up a phenomenal drummer from Chicago named Donna Smolak who not only sang but play double bass drums.  SHE DID NOT PLAY LIKE A GIRL!!!  We became a very tight group.  We did get into the studio in Memphis and recorded a demo which was never released.  All good things come to an end, and unfortunately for me, I was losing my eyesight and had to quit the band.  I ultimatly went blind for six years and continued playing with local groups playing Top 40 / R&B music.  I also did some piano bar work. After two corneal transplants, I was able to prepare for a new career as an administrative assistant, actually winning a national typing contest

Tony Velasquez died of cancer a few years ago, which was devastating to her sister Char.  They were very close and Char was Tony's caretaker.  Char currently lives in Reno, Nevada, still plays the bass and has a house gig there.  As of 2009 Jino Chominski, now known asJJanice Evans, lives in Algonac, Michigan. is a Massage therapist, a Tai-Chi instructor, and a drummer.  Donna Smolak, the later drummer with the group, is a very successful realtor in downtown Chicago, right on
Michigan Avenue. She also plays drums on the side.

All of us girls ONLY wanted to play music - it seemed our destiny and what an exciting time to be playing music.  Your reference in your article about girl musicians in the late 60's-early 70's not wanting to be a secretaries cracked me up, as that is what I ultimately ended up doing.  I am a Sr. Executive Assistant at Kellogg Company's World Headquarters - been there the past 18 years.


Is this an amazing story or what? Most people are looking for a bite of the apple, and it seems like The Socialites got a big, juicy one. Thanks so much to Sandy Towers for bringing to light this great tale.