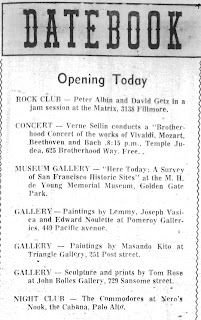 (San Francisco Chronicle Datebook listings from Monday, January 6, 1969)
The San Francisco Chronicle Datebook section was full of interesting listings in the 1960s, even if they often only provide tantalizing clues to events that would otherwise have disappeared. San Francisco's Matrix club was one of the few hippie hangouts, and all sorts of surprising events took place there. Ironically, as a hangout rather than a major venue--The Matrix was too small to be "major"--many of the most interesting events seems to have taken place on weeknights. On January 6, 1969, the first Monday of the year, the listings of openings (above) are topped by this one:

ROCK CLUB--Peter Albin and David Getz in an open jam session at The Matrix, 3138 Fillmore.

Peter Albin and Dave Getz were the bassist and drummer, respectively, of Big Brother and The Holding Company. Big Brother had just broken up in late 1968, when Janis Joplin had left the group. Janis had not been an original member, but she rapidly eclipsed the group itself, and when their 1968 album Cheap Thrills became a mega-hit, Janis ended up leaving the band behind. The rocket ride from underground hipsters to National rock stars had been very hard on some of the band members, and Big Brother did not survive her departure. Janis Joplin and Big Brother played their last show at the Avalon Ballroom on December 1, 1968. Afterward, guitarist Sam Andrew continued on with Janis's new band, while fellow guitarist James Gurley took some time out from making music. Albin and Getz were left adrift.

I had known from various Family Trees and the like that Albin and Getz started jamming together in early 1969. David Nelson, an old South Bay friend of Albin, was known to be one of the participants. Nelson's group The New Delhi River Band had ground to a halt in early 1968, so he too was at loose ends. A few other musicians are vaguely alleged to have jammed with Albin and Getz, but it was difficult to ascertain. However, until I found this listing, I had no idea that Albin and Getz had led any kind of public performance. Who played with them? What did they play?

From 1968 onwards, at least, Monday night was usually "jam night" at the Matrix. A local band or musician would host a jam session. Usually someone was the host for many Monday nights in a row, but sometimes individual musicians or bands would host a single Monday night session. Monday night was a very thin night for performances, so in many ways it was like "musicians night out." When you read about various rumors about famous San Francisco players sitting in at the Matrix, often as not it turns out to have been on a Monday night. Also, to some extent the term "jam" implied as much that the show wouldn't be "regular" rather than specifically that there was a jam. Thus if a group of players wanted to work on something different in public, billing it as a "jam" implied that you wouldn't be seeing a regular set.

In any case, you know what I know. Albin and Getz, who had probably been jamming with their friends somewhere, led a jam session at The Matrix. I would suspect David Nelson was there, since he has acknowledged hanging out with them at the time, but even that is just a guess. Albin and Getz knew everybody and were well liked, and on a Monday night in January almost no musican in San Francisco was working, so absolutely anyone could have played with them.

Tantalizing as this event was, it doesn't seem to have been repeated. The next weekend, January 13, the bill wasn't Albin and Getz--it was "Carlos Santana And Friends," if anything even more fascinating. The next two Mondays (Jan 20 and Jan 27) were not listed in the Chronicle, so while there may have been even better shows, we don't know anything about them. Needless to say, anyone with insights, recovered memories (real or imagined) or amusing speculation is encouraged to chime in.

Postscript: I am no expert on this, but it is plausible that "The Commodores" who are playing at Nero's Nook in Palo Alto, were in fact the Lionel Richie-led band from Tuskegee, AL, who hit it very big in the 1970s. They did sign to Atlantic in 1968, and Nero's Nook, at the swanky Cabana Hyatt House, would be the sort of supper club engagement Atlantic might have tried to find for them.
Posted by Corry342 at 2:39 PM